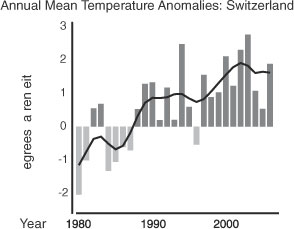 In journalism, professional norms favor telling gripping stories about individuals and places. Applied to the debate over global warming, many journalists believe that if they can recast the complex issue in terms of familiar characters and local places, they can activate greater public concern and understanding.

Yet it remains important that these individual stories are embedded within more thematic presentations that focus on broader climate trends and impacts. It’s also important that individual stories about citizens who are taking action also provide context for how even greater responsibility rests with major institutions and public leaders. Figuring out the right balance in journalism between personal stories and big picture explanations remains a central question for both practitioners and communication researchers.

The NY Times has been running a Sunday op-ed series that offers a version of this balance between personal stories and climate trend context. Each op-ed features a guest author’s personal narrative on how climate change has affected their country or location. However, each narrative is also paired with a graphic depicting temperature trends or other climate trends specific to the region (see above). It’s an interesting combination of compelling personal anecdote and a visualization of more thematic, big picture data.

Phil Kitcher and the Critical Examination of New Atheism

As I’ve argued, one of the reasons I find the New Atheist PR campaign so troubling is that it is has radicalized a movement that feeds on anger and fear […]