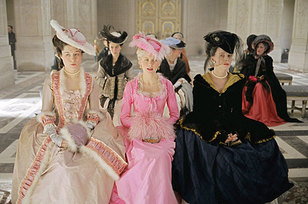 This is probably the single most disturbing thing you will read on this Valentine’s Day: an “innovative” Parisian fashion designer has decided that the waist-cinching corset should become the Next Big Thing in male fashion. In other words, take the picture above and imagine a bunch of French dudes with big beer guts wearing similar types of outfits. It’s the type of mischievous story that routinely shows up on Yahoo! News (via AFP):

“After skirts, make-up and pantyhose for men, the corset, onetime symbol

of women’s oppression, might be the next big thing for

percent more when made to measure.

“I felt frustrated by the lack of choice of clothing for men,” he told AFP. “I made one for myself and they kind of multiplied.” Wearing jeans with a gray silk corset of his own making over a shirt

and tie, Nuffer, who learnt the complex trade with his corsetiere

mother, stands tall, waist nipped in, shoulders wide, back straight. Corsets for men have a history, he said, worn by medieval horsemen to

protect the spine, adopted by bikers today for the same reason.

According to the article, the “real inspiration behind Nuffer’s corset” dates back to the days of

the 1789 French Revolution. Hence, the photo from Sofia Coppola‘s film Marie Antoinette, now available on DVD. (I decided at the last minute against a racier picture from Frederick’s of Hollywood. This is, after all, a PG-rated, family-oriented web site!)

Google innovation in the Big Apple

If you’re looking for a quick Google fix this week, Information Week is dealing. Start off by learning more about Larry Page’s pet innovation projects. Apparently, the Google co-founder thinks […]