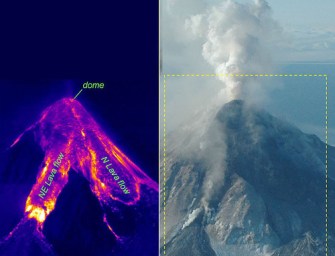 The Alaska Volcano Observatory is reporting that both current eruptions in the Aleutians – at Okmok Caldera and Mount Cleveland – are showing signs of a lava extruding from the vent. Thermal anomalies have been imaged at the vents of both volcanoes, although no lava has been seen thus far. Both volcanoes continues to emit ash and steam.

The news that lava is erupting isn’t really shocking (it is a volcano, you know). Many times, these eruptions begin with a “throat-clearing” phase of ash and volcanic debris being erupted from the vent. If the magma is still rising after these initial explosive events, then depending on the composition of the magma/lava, it will make its way to the surface through the vent. Now, as you might imagine, it is difficult to perch yourself near the vent to see the lava when it first erupts, so this is why AVO talks about “thermal anomalies”. With our many “eyes in the sky” (a.k.a. satellites), we can watch for large heat differences on land surfaces – the sort of thing the military uses on spy satellites to look for ships heating up their engines when they’re about to leave port. Now, the ash column, while hot, doesn’t carry the same radiant thermal energy of lava emerging from a vent, so when a large thermal anomaly – let’s say a few hundred degrees – is seen at the volcanic vent, it is a good bet you’re seeing lava coming out (see the image of Augustine Volcano erupting in 2006, above). Whether this means that the eruption is winding down or cranking up, well, that is still anybody’s guess without proper seismic information to go along with the thermal data.

Related
The Future
Custom Image Test
Lorem ipsum etc etc etc etc
Life
Visualization test
Lorem ipsum dolor sit amet, consectetur adipiscing elit. Nullam id tincidunt mi. Morbi malesuada nulla sit amet est hendrerit tincidunt. Etiam viverra, nisl id volutpat eleifend, est augue sodales orci, […]
L&D Strategy
Transfer of learning: The necessary step to make learning stick
Transfer of learning is a concept that should be top-of-mind when planning any learning and development program. Why? In a perfect world, the billions of dollars organizations collectively spend every […]
Starts With A Bang
Why we’ll never see back to the beginning of the Universe
We thought the Big Bang started it all. Then we realized that something else came before, and it erased everything that existed prior.
Thinking
Is there an afterlife? See how your answer compares to polled Americans
There is more consensus on what heaven looks like than hell.
Up Next
Guest Thinkers
Is Chaiten a clogged volcano?
nnONEMI, the Emergency Office of Chile, is expressing concerns that Chaiten might be readying an even bigger blast than what we’ve seen already in the past few months. In particular, […]