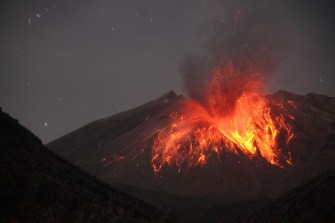 Sakurajima in Japan, erupting in December 2009. Image courtesy of Photovolcanica.com

Richard Roscoe at Photovolcanica.com has just posted two great sites focusing on two of the most active volcanoes in Japan: Sakurajima and Suwanosejima. These volcanoes are almost constantly erupting with small strombolian events punctuated by occasional plinian eruptions.

Sakurajima is on the island of Kyushu (well, technically Kagoshima, but right off the coast of Kyushu) less than 10 miles / 20 km from the city of Kagoshima. The volcano has been erupting since 1955 with both explosive and effusive products – some quite large, up to VEI 3. In January 1914, Sakurajima had a VEI 4 eruption after almost 100 years of quiet. The area near the volcano, including Kagoshima, was buried in ~1.5 km3 ash and tephra, with thousands of buildings destroyed from the weight of the tephra fall. If you feel like seeing what’s up at Sakuajima, you can watch its volcano-cam.

A map of the most active volcanoes of Japan.

Suwanosejima is further south in the Ryukyu Island along the Japanese arc on Suwanose Island. It, too, is a very active volcano, with the current eruptive cycle starting in 2004, but prior to that, it erupted almost every year since the early 1990’s. It tends to favor strombolian explosions that are smaller (VEI 1 and 2) than Sakurajima. However, a a series of large eruption in 1813-14 caused people to abandon the island. That eruption produced pyroclastic flows and lava flows that ranked as a VEI 4 eruption. It had a second VEI 4 in 1889, but since then the eruptions have been smaller.