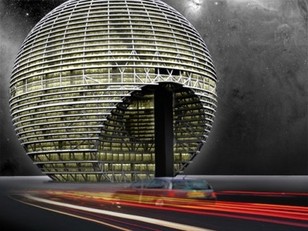 Sonia Zjawinski of the Underwire blog points to a cool new architectural creation being mulled over by our good friends in the Middle East. Despite the coolness factor of having been designed by star architect Rem Koolhaas, the proposed building in the United Arab Emirates looks a bit like, well, the Death Star:

bears a striking resemblance to the Death Star. Designed by Rem

Koolhaas and Reinier de Graaf as part of their collaboration with OMA,

I can’t imagine this building being accepted. It’s terrifying and

uninviting. They would have a hard time convincing confabs to hold

their events in the dark matter. If it does get approved it’ll only be because of the Koolhaas name, which would be a huge shame…”

ASIDE: This being the 30th anniversary of Star Wars over the weekend, be sure to tune in to the History Channel’s “Star Wars: The Legacy Revealed” special on Memorial Day night. (full disclosure: some of my colleagues at Electric Artists helped out with the  advertising and marketing campaign for the  show)