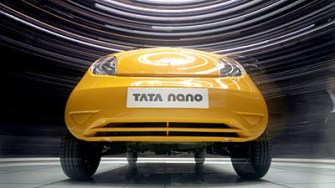 It’s often the case that imposing constraints can actually lead to more, not less innovation. Consider the case of the Tata Nano, which launched today in Mumbai to much acclaim and hype. It’s a car manufactured in India that costs less than $2,000. For that price tag, you give up a bit in terms of power and features, but you also get world-class design. Plus, Tata is taking a page from the Cooper Mini playbook and marketing the Nano as a cool, hip alternative for urban city-dwellers.

Detroit, are you listening?

How to hit an innovation Grand Slam

As the economic recession continues to take a bigger and bigger toll on people’s livelihoods, a number of companies are stepping up with new promotions that seek to reduce some […]