I just finished Dr. Paul Collier’s award-winning book, The Bottom Billion. An economics professor at Oxford University, Collier notes that traditionally we have thought of the world’s population as being made up of ‘??a rich world of one billion people facing a poor world of five billion people’?? (p. 3). 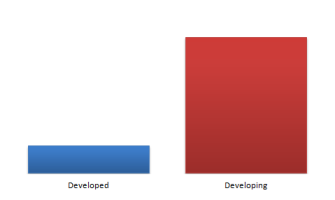 Instead, we need to recognize that the developing world should be divided into two groups, the middle four billion and the bottom billion. The countries in the middle group have economies that are growing, life expectancies that are rising, infant mortality rates that are dropping, and malnutrition rates that are declining. They still have a long way to go compared to the developed world, but they are making progress. India and China are both part of the middle four billion, despite once being poorer than many of the countries in the bottom billion. 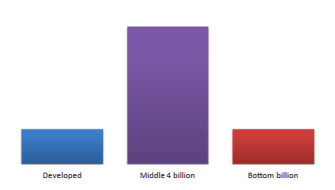 In contrast, the bottom billion people continue to live in ‘??the fourteenth century, [doomed by] civil war, plague, and ignorance’?? (p. 3). Their economies are not growing and, ‘??given the power of compound growth rates, [the] differences between the bottom billion and the rest of the developing world will rapidly cumulate into two different worlds’?? (p. 10). The bottom billion not only are ‘??falling behind … [they are] falling apart’?? (p. 3).

Below is a graph of the growth rates of the bottom five billion over the past few decades [note that the actual growth rates were not this linear; Collier reported his figures by decades so I had to approximate]. Growth rates were as follows: 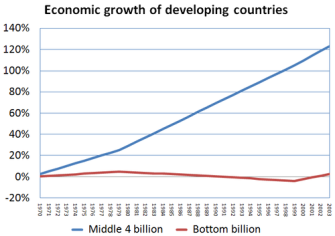 When these growth rates are plotted cumulatively, the chart looks something like this:

I have greatly appreciated how this book has reoriented my thinking about global economic development challenges. Being a data guy, I have jumped into some of Collier’??s numbers in order to help me envision what the challenges are that face the bottom billion. As we look toward the plight of our own disadvantaged student populations, we would be well-advised to look for data that help us reorient our thinking so that we may appropriately address our learning challenges. What data do you have that might shake up the thinking of your educators, students, and families?

[I learned a lot from this book. I give it 4 highlighters.]

The first season of edublogger fantasy baseball is nearing its conclusion. Dr. Jon Becker of Educational Insanity ran away with the league, despite many of us his questioning his sanity […]