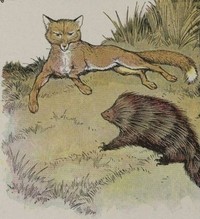 “[Philip Tetlock] categorises experts intontwo camps: foxes and hedgehogs. Foxes have many tricks (i.e. expertsnthat cover broad areas) while a hedgehog has but one trick (i.e. a deepnsubject matter expert).

Tetlock examines the accuracy of thesentwo groups across a range of different criteria. It’s fascinating, andnespecially relevant for my work on the Technology Futures programme.

We’ve found that the mix of foxes and hedgehogs in any one large group can dramatically alter the buzz of an event.

Asna sidenote Tetlock has been quite clever in selecting the two animalsnuse as illustrations. The imagery behind the choice is strong, and youncould conceivably label someone a hedgehog without incurring theirnwrath. After all, rolling into a spiky ball is quite clever. You couldnnot really say the same if you labeled someone a slug, a flatworm or a hagfish (despite the fact that a hagfish has a couple of neat tricks too)…”

Anyway, as might be expected, foxes make better predictors than hedgehogs.

[image: The fox and the hedgehog]