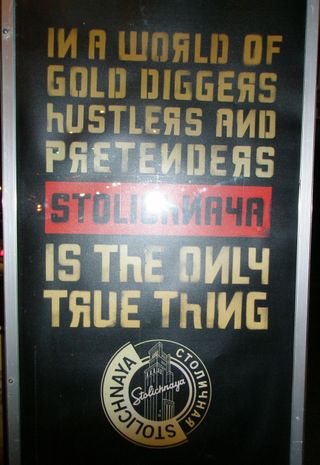 This poster for Stolichnaya vodka, to the casual observer, probably looks authentic. There’s definitely something very Russian about the text, right? And it’s from a Russian vodka company, so why would anyone doubt this advertisement? But how authentic is it? The ad at least implicitly claims the mantle of “authenticity” for Stolichnaya (“Stoli”) — hinting that all the “fake” vodka brands from France, Poland, Sweden and wherever else are just pale imitations of true, authentic Russian vodka. Yet, believe it or not, this advertisement has 20 different mistakes in it!

Which is sad because Stolichnaya actually was keeping it pretty real for awhile. I loved the video ads with the dancing Cossacks and the Red Army Choir music! Stoli is certainly not alone in its horrible transgressions against the Russian language — consider the Red Square restaurant in Las Vegas, which also uses that horrible inverted “R” to ill effect. (Do all vodka marketers assume that Russians are dyslexic?) Stoli is actually a Russian vodka that Russians somewhat respect (although, truth be told, Putinka, Moskovskaya, Gzhelka and even Russkii Standart are more popular), and it’s a shame that Stolic-chi-a-cha dropped the ball when it came to authenticity.

How innovative is your city? McKinsey Digital has released a new innovation study of the world’s leading cities, grouping them into one of four different categories — “hot springs,” “dynamic […]