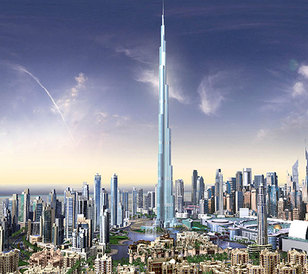 With all those petrodollars flowing into the Middle East, it’s perhaps no surprise that Dubai has the mega-bucks to pull off this project: the tallest building in the world. Yep, according to Yahoo! News, the oil sheiks of Dubai are putting the finishing touches on the Burj Dubai Tower, the tallest free-standing structure in the world. And they aren’t even telling people how high the building will be when it’s completed — you know, just in case the folks in Taiwan or Shanghai or Kuala Lumpur or Toronto get any funny ideas about sticking on an antenna or something to create a taller building than the one in Dubai. Every emerging market around the world, it appears, has been engaged in a frantic architectural race to create the world’s tallest building. 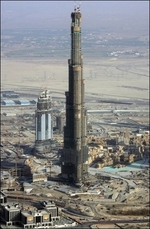 As the Cold War arms race illustrated, however, trying to outmatch your competitors by building more and more weapons eventually leaves one side bankrupt and on the verge of collapse. In the 1980’s, of course, it was the Soviet Union sliding into economic ruin as the result of disastrous overspending on the military-industrial complex.

ASIDE: Is it just me, or does the current tower in Dubai only vaguely resemble the majestic, gleaming structure in the original rendering by the architectural firm?