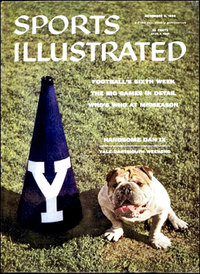 The Wall Street Journal recently ranked the best business schools in America according to a number of criteria, including a list of the 10 MBA programs that produce the most creative and innovative students. The list primarily includes B-schools with a strong reputation for technology and entrepreneurship, but a few other stellar performers — including Yale University — cracked the Top 10:

Mad props to Dean Podolny and former Dean Garten for their role in putting together such an innovative program at Yale!

[image: Yale’s “Handsome Dan” on the cover of Sports Illustrated]

nnRecently, 37 Signals highlighted the management style of Craigslist CEO Jim Buckmaster. It would be an understatement to say that Jim doesn’t approve of business as usual in America: “[He] […]