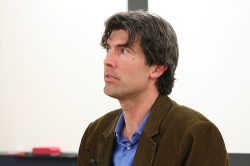 Oh, and he doesn’t reply to any of his 100+ daily  e-mail messages (“I’m not real chatty on e-mail”) and he apparently doesn’t bristle at the notion of being called a “socialistic anarchist.”