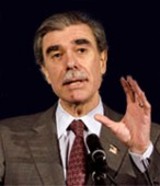 On Tuesday, September 18, the U.S. Commerce Department’s National Summit on American Competitiveness will bring together some of the leading thinkers in American innovation — including executives like Fred Smith of FedEx, strategy gurus like Michael Porter of Harvard Business School and venture capitalists like Floyd Kvamme of Kleiner Perkins — for a full-day event in Washington, D.C. to discuss the future of innovation within American business:

“As a leader on issues related to American competitiveness and innovation, you are invited to be a part of a historic event that will highlight America’s need to advance strategies that keep our country on the competitive edge in the 21st century worldwide marketplace. […]

The National Summit on American Competitiveness will bring together leading corporate chief executives, world-renowned academics and opinion leaders, and high-ranking government officials. In addition, CNBC’s Maria Bartiromo will serve as the moderator for the first panel and will also be broadcasting her show live from the Summit.”

If you’re unable to make it to Washington next week, there’s still an opportunity to watch a live streaming Webcast of the event, courtesy of the American Competitiveness website sponsored by the U.S. Department of Commerce.