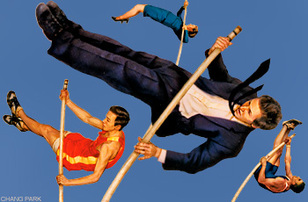 nThe cover story of the current issue of Business Week looks at how the Olympic Games have fostered innovation across a wide range of sectors and industries: “Sometimes innovation pops up in unexpected places—from ticketntechnology to starting guns. Makers of these goods hope to get an addednmarketing boost from their ties to the Olympics.”

Is it just a coincidence that GE – the parent company of Olympic Games broadcaster NBC – is mentioned prominently in the article?