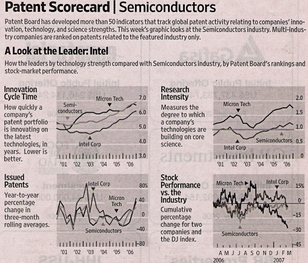 Every now and then, the Wall Street Journal features results from The Patent Board, which has developed more than 50 indicators that track global patent activity relating to companies’ innovation, technology, and science strengths. Earlier in the week, the Wall Street Journal took a closer look at the semiconductor industry by profiling two leading innovators, Intel and Micron (see above graphic), and publishing a wealth of data about innovation performance within the semiconductor industry.

In terms of innovation cycle time and stock market performance, Intel appears to be out-competing Micron. However, when it comes to research intensity, Micron appears to be doing a better job of building on its core science capabilities. In another graphic (not included), Patent Board ranked the Top 10 semiconductor companies in terms of their technology strength, a factor that blends together qualities such as science strength, innovation cycle time and research intensity into an overall indication of the “scale, quality, impact and nearness to core science of a company’s patent-based intellectual property”:

So far so good. Intel and Micron both score high in various categories and appear to be the innovation leaders. However, if you’re like me, you’ll probably find all these statistics a bit hard to decipher. First of all, the idea of linking “patent activity” to “innovation” is not always the most productive approach. The most innovative companies are not necessarily the ones with the biggest patent portfolios, as Booz Allen Hamilton has shown over and over again. Second of all, it seems like these “innovation rankings” fall apart when it comes to measuring stock market performance. (And these statistics were found in the “Money & Investing” section of the newspaper, so it’s a safe bet that investors will use them to make stock picks)

A naive investor, I suppose, would assume that the “most innovative” semiconductor companies are those that would turn in the best stock market performance. After all, these “innovative” companies keep coming up with cool new patents, which lead to cool new products, which lead to more revenue and increased cash flow. (QED!) However, that’s not the case, as is seen in the final graphic provided by Patent Board.

Intel, the anointed innovation leader when it comes to patent-based IP, actually has a stock price that has fallen by 1.3% over the past 52 weeks. Micron, the #2 pick, has fared even worse: its stock price has fallen by 22.9% over the past year. In contrast, companies further down the patent pecking order, like Infineon (+59.3%), FormFactor (+24.6%) and Taiwan Semi (+24.6%), have turned in stellar performance.

At which point, of course, I throw my hands up, sell off my Intel position, say goodbye to AMD, and decide to invest in some high-growth, high-risk Taiwanese semiconductor plays.

[graphic: The Patent Board in the Wall Street Journal]