Chaiten has made it back into the news in the past couple days, both with new events at the caldera and with findings from the initial blast in May 2008. Here goes: 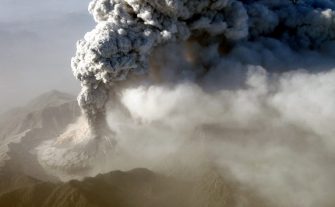 The latest USGS/SI Weekly Volcanic Activity Report mentions that over the last week, Chaiten experienced what was likely a significant dome collapse of one of the two domes growing in the caldera. People living close enough to the volcano to see the ash plume noticed it became larger and darker on September 29th. Afterwards, visual observations of the caldera by air confirmed that a dome collapse likely occurred and a third dome has begun to form in the SW part of the caldera. A new series of blast craters were also noted on the original two domes. Seems that the eruption is still going strong and will likely continue to fill the caldera with new rhyolite for some time to come. You can see all the details of the last few days events on the Volcanism Blog‘s translation of the latest SERNAGEOMIN Chaiten update.

The Rapid Ascent of Chaiten Magma

The other news this week was the report in Nature that the rhyolite magma from the initial eruption of Chaiten on May 1, 2008 travelled much faster than most geologists thought could be possible for rhyolite magma. Rhyolite is a very sticky, viscous magma that tends to, when erupted, travel quite slowly. The analogy to understand how slow it moves (when flowing) is that you can outrun a basaltic lava flow coming at you, but with a rhyolite, you could likely build a house and live comfortably for many years without worrying about being overrun by the rhyolite lava (*however, the explosive nature of rhyolite and its propensity to flow pyroclastic flows makes this scenario, well, a little less ideal). The stickiness of rhyolite magma suggests that when it travels through the crust, it should travel slowly – or, at the very least, slower than most basaltic lavas.

This study by Dr. Jonathan Castro and Dr. Donald Dingwell found that the rhyolite magma from Chaiten travelled through the crust at extremely rapidly. From the initial precursor earthquake, it was only ~24 hours before the eruption started. Based on their analysis of samples of the rhyolite lava, they have determined that the rhyolite was moving from ~5 kilometers below the caldera. By studying the minerals in the rhyolite and their compositions, you can determine the pressure and temperature of the formation of the lava. These results can be supported by running experiments – can you reproduce the same mineral and compositions in your lab by heating and pressuring samples of the same rhyolite. Castro and Dingwell were able to constrain the depth of the magma chamber from whence this rhyolite came to 5 +/- 0.5 km depth.

Now, you could just say that, alright, it started at 5 km depth and made it to the surface in 24 hours, so it was traveling at ~0.2 km/hr. Of course, is there evidence in the minerals to back this up? When lavas erupt, the pressure is released and minerals will tend to grow rims of different compositions and shapes (due to this depressurization). You can use this to estimate how quickly the magma ascended – and that is what Castro and Dingwell did. They found that the ascent rates from their experiments on Chaiten rhyolite were even higher – closer to ~1.8 km/hr. This rate is a veritable cheetah when it comes to sticky rhyolite magma. It suggests that the magma took ~4 hours to reach the surface from the magma chamber, which is a shorter interval than the precursor earthquake might imply.

What is the upshot of all this? Well, it means that we could have little notice for another Chaiten-like eruption at a rhyolite volcano. These eruptions are, luckily for non-volcanologists, very uncommon (which is why Chaiten is so fascinating). Worldwide, Chaiten is like the only rhyolite dome eruption of this magnitude in the last 200 years. Castro and Dingwell suggest that we might want to monitor some of these large rhyolite systems a little more closely (e.g, Medicine Lake or Newberry Caldera in the U.S.) because we might not have much time to react when the signs of eruption start.

Do you have a burning question about the Chaiten magma you’d love to be able to ask Dr. Castro? He has kindly offered to answer some questions about Chaiten and his research for Eruptions readers. Send me your questions at

and I’ll choose some of them for Dr. Castro to answer. I’ll post the interview and the answers to your questions here on the blog.
Related
The Present

Friday Flotsam: Australian volcano watch continued, the impact of the Siberian Traps and the threat from Hualalai

More threats to life and limb by Australian volcanoes, real threat posed by Hualalai and the impact of the Siberian Traps on trees.