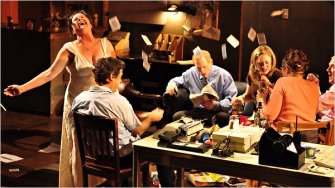 It’s almost a cliche these days to say that the Web is accelerating the move toward an attention-deficit disorder literary culture that celebrates the 140-character tweet but has a hard time digesting the 140-page book. We’re constantly reminded that the Web is somehow making us stupid, but I’m starting to wonder if the next iteration of the Web – helped along by the explosion of new content experiences made possible by the iPad and the innovative programming capabilities of HTML5 – could actually lead to a backlash of sorts against short-form content culture and a renewed celebration of deep, experiential content.

I recently attended “Gatz,” a seven-hour marathon production of F. Scott Fitzgerald’s “The Great Gatsby” at the Public Theater in New York and was simply blown away by the experience of hearing actors read aloud the entire book on stage before a rapt audience. During Gatz, the cast members literally read every word on every page — 49,000 in total — over a period of more than seven hours in a tour de force of narrative nuance that leads you deeper and deeper into the magical world of Gatsby, Nick Carraway, Jordan Baker and Tom & Daisy Buchanan. This was like an audio book on anabolic steroids.

In his theater review of Gatz, Charles McGrath of the New York Times described this phenomenon of “what happens when you get caught up in a book” on stage, compared to reading it in conventional format:

“When we read a book we don’t really watch or listen to a mental movie. We mostly imagine characters in a kind of shorthand, calling to mind only what’s absolutely necessary. This is what makes watching a filmed or televised version of a book… so pleasurable and sometimes so distracting: the blanks get filled in. But what “Gatz” captures so cleverly is the improvisatory quality of reading: the characters aren’t cast perfectly according to type, the way they would be in a film; they’re pressed into service out of the available office staff.

Our reading and listening imaginations do much the same thing. Reading in bed, riding the subway with the iPod plugged in, driving the car and feeding CDs into the dashboard slot, we’re not transported from this life to another, exactly, but to a sort of halfway realm. We’re partly in East Egg, or wherever, and partly still in that cluttered mental office, where the phone rings — literally sometimes. We look out the window and see, oops, that we’ve just missed our subway stop or, worse, that a state trooper has just pulled alongside and he has his lights flashing.” 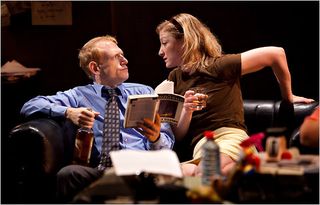 This is where the next iteration of the content Web needs to take people — to new types of meaningful content experiences and away from throwaway, disposable (and dare I say it) junk Web culture. Imagine a content world where the experience of The Great Gatsby on your Kindle or iPad is richer and more meaningful than what is possible with a favorite, dog-eared, coffee-stained and annotated book — even more engaging than what is possible with film.

I think this type of content experience will require more than just interactive content modules on the Jazz Age, hyperlinks to original book reviews of F. Scott Fitzgerald’s works on the Web, or brief contextual video clips from previous film versions of Gatsby. These multimedia additions, while wonderful in and of themselves, would only encourage more sampling and “browsing” rather than deep concentration and focus. I’m thinking more along the lines of a live reading of the book by an actor in a different city via Skype as a way of immersing yourself in the dramatization of the text in a radically new way.

What’s great about Gatz is that it has a lot of people talking about what they just experienced. Is the future of content (especially Web content) in these types of long-form experiences or not?