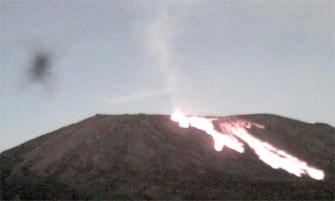 A while back I reported on a brief eruption at Piton de la Fournaise on Reunion Island and now a number of Eruptions readers have pointed out to me that it has erupted again (french). Seems like a similar event to the previous, with fissure vent effusive flows on the southern and eastern slopes of the shield volcano.

A system of sub-parallel fractures along the summit of Dolomieu crater fed
nlava flows on the southern slope of the Piton de la Fournaise, inside the
nEnclos Fouqué. A second fissures system opened on the eastern flank of the
nDolomieu summit crater at 20:25 (GMT +4). Then lava flows were spent towards
nthe eastern slope.

This eruption ended during the night at 00h40 (GMT +4) after a gradual
ndecrease in magma supply from midnight (local time). This morning, Tuesday,
nDecember 15, 2009, a visible degassing in the south and southeast fractures
nis associated with a low intensity eruptive tremor. All of the lava flows
nwas confined to high zone of the volcano and more specifically the slopes
nsouth and south-east of Piton de la Fournaise.

You can find out more info on the IPGP website, which includes an incredibly cool time-lapse video of the eruption as it occurred. The fissure opens with fountaining that then sends lava flows down the slopes of Piton de la Fournaise. It is one of the better videos I’ve seen that show that Hawaiian-style eruption stages of fountaining followed by flows as the presumed dike erupts along the fissure.

{Hat tip to Boris Behncke for the link to the video}.

The latest USGS/Smithsonian volcano report, with news of volcanic eruptions around the world.