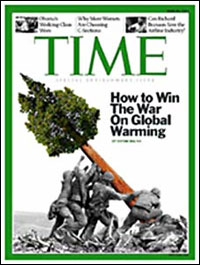 Following the AAAS meetings in February, I had this to say about the future of science and environmental journalism:

The future will be online, in film, and/or multi-media, merging reporting with synthesis, analysis, personal narrative, and opinion. The goals will be to inform but also to persuade and to mobilize…However, the new forms, modes, style, and sponsors for science coverage will mean that journalists will have to rethink their standard orientations and definitions of objectivity and balance. The future is already here, it’s time to talk about what it all means.

This week’s Time magazine cover story on global warming is an occasion for that discussion. As I wrote on Friday, the framing of the issue by the magazine marks a major departure from a past emphasis on doom and impending disaster, offering a new focus on national unity around a common challenge similar in nature to the Great Depression, the Space Race, or World War II.

The cover, however, is not without controversy. Some media critics have alleged that Time’s reporting on climate change has strayed into advocacy. On Monday, the magazine’s deputy managing editor Romesh Ratnesar appeared on NPR’s Talk of the Nation to discuss with host Neal Conan the cover and their new framing of climate change (audio).

Ratnesar’s comments reflect what I see as the necessary new mode for public affairs and science coverage of climate change, a mode that merges reporting with analysis, a sense of urgency, and a specific focus on a range of policy options. Below the fold are Ratnesar’s comments from the interview.

CONAN: And the second paragraph of the special report on the environment reads, in part, “The steady deterioration of the very climate of our very planet is becoming a war of the first order, and by any measure, the U.S. is losing. Indeed, if we’re fighting at all, and by most accounts we’re not, we’re fighting on the wrong side.” Which is strong stuff, and you may be right about all that, but doesn’t that read more like an editorial than a news story?

Mr. RATNESAR: Well, what we try to do every week at Time is not just make sense of the big ideas facing the world, but also try to give readers some way to think about them, and sometimes provide a strong point of view, and this isn’t the first time we’ve done that.

What we had decided to do with this story is try to say, OK, there is a rough consensus in the world that global warming is happening, that something needs to be done, and that dramatic steps need to be taken if we’re going to get to a point where we have this problem under control. What would it take for the United States to actually tackle the climate crisis?

And so we went about trying to lay out a blueprint for a kind of national strategy, backed up by reporting by our environment writer, Brian Walsh, and I think the result is a clear and defensible blueprint for how you would go about tackling climate change if we were to make it a national priority.

CONAN: If we were to make it a national priority, which Time Magazine clearly thinks we ought to do.

Mr. RATNESAR: Well, I think that we believe that the climate crisis is one that is going to be affecting us, affecting our planet. We’re seeing the consequences every day. To some extent, the food crisis we’re watching unfold around the world has some roots in global warming. So we do believe this is a subject that we need to be tackling as a nation and coming up with better strategies to fight.

. ..CONAN: And Romesh Ratnesar, but is that journalism or is that advocacy?

Mr. RATNESAR: Well, I think if we were simply writing an editorial that was not backed up by reporting, a journalism-intensive study of the issue, then I would say that would tilt toward advocacy. But what we’ve done is do a kind of report and analysis of this problem. It’s an issue that we have studied and our writers have studied and written about over the years, and it’s one we feel very comfortable with.

CONAN: Also, then, about the cover, was there some discussion of this idea that it might be offensive to some people?

Mr. RATNESAR: Well, we felt that the story that we were publishing, and our view of this issue, merited this choice of taking an enduring symbol, an image of American patriotism, of American heroism and national purpose, and essentially saying that, through this image, saying that the same kind of commitment is going to be needed if we are to solve the global-warming crisis. So we didn’t intend to, nor did we feel that we did, offend, in any way, by publishing this cover, using this image.

CONAN: Well, clearly, you did offend some people. I mean, Marine Corps veterans of Iwo Jima have called it “disgusting,” “disrespectful.”

Mr. RATNESAR: Some of the criticisms that I’ve seen, and I’ve not read all the criticisms of the cover, although we’re aware there are some, have specifically raised the question of whether the global-warming issue is comparable to the fight against fascism, and Japanese imperialism in World War II.

Obviously, those are debatable issues that reasonable people can disagree about. But I have seen some of the criticisms, essentially, say that global warming is not a crisis, that it’s an invented fact. It’s not backed up by the science. And I disagree with that and I think we, the editors of Time, disagree with it and our government disagrees with it.

Related
Life
Visualization test
Lorem ipsum dolor sit amet, consectetur adipiscing elit. Nullam id tincidunt mi. Morbi malesuada nulla sit amet est hendrerit tincidunt. Etiam viverra, nisl id volutpat eleifend, est augue sodales orci, […]
L&D Strategy
Transfer of learning: The necessary step to make learning stick
Transfer of learning is a concept that should be top-of-mind when planning any learning and development program. Why? In a perfect world, the billions of dollars organizations collectively spend every […]
Starts With A Bang
Why we’ll never see back to the beginning of the Universe
We thought the Big Bang started it all. Then we realized that something else came before, and it erased everything that existed prior.
Thinking
Is there an afterlife? See how your answer compares to polled Americans
There is more consensus on what heaven looks like than hell.
Thinking
How science changes the way we think, according to 10 leading scientists
A group of prominent scientists shares how research has changed them.
Up Next
Guest Thinkers
Urban Areas & Climate Change Communication Solutions
Back in February, I traveled to Rome, Italy to present at a conference sponsored by Columbia University’s Earth Institute and the Adriano Olivetti Foundation. The focus was on climate change […]