I read with great interest the other day Jeff Utecht’s post regarding his declining Technorati authority. Although I agree with others that Technorati has some deficiencies as a blogging metric, it still can be a useful tool to help monitor conversations and online presence.

Like Jeff and the handful of other blogs that he mentions, I also have seen Dangerously Irrelevant‘s authority decline, particularly in the past few months. I have been attributing this to:

Jeff hypothesizes that another factor may be Twitter. As many of us move our conversations that direction, fewer posts and/or comments are occurring in the edublogosphere. I’m an infrequent tweeter, so while Twitter may explain The Thinking Stick’s decline, it doesn’t really explain my own. In Jeff’s comments section, Sue Waters also notes that the decreases in authority may be due to the recent changes in Technorati’s indexing methodology.

It’s hard to say exactly what’s going on here. Probably all of the reasons above and more. I wasn’t losing sleep about my own Technorati decrease, but Jeff’s post intrigued me because I hadn’t thought about the fact that others might also be having a similar decline. I found the time this morning to extend Jeff’s quick calculations to the entire list of edublogs from my post in June. Here’s what I found…

[note: I simply worked with the list from June. I did not recalculate the ‘top 50’ nor did I determine if any new blogs should be included instead of those listed.]

1. Nearly all of the top edublogs (as measured by Technorati authority) saw a decline in their authority since June.

As the chart below shows, some edublogs had quite dramatic decreases. The average authority decrease was 88; the median decrease was 62. [click on the image for a larger version] 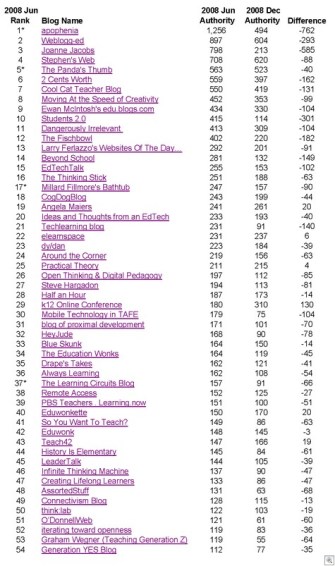 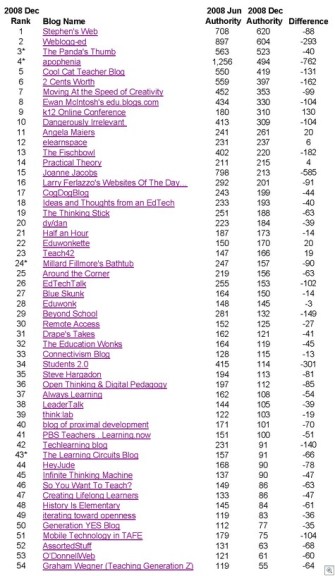 3. Here’s the list ordered by gain/loss in authority rather than overall authority. Only six blogs saw an increase in authority since June. 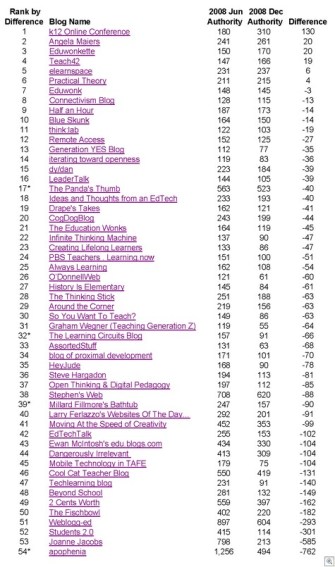 4. Here’s the list ordered by change in overall rank (again, within just this list and not the overall edublogosphere). 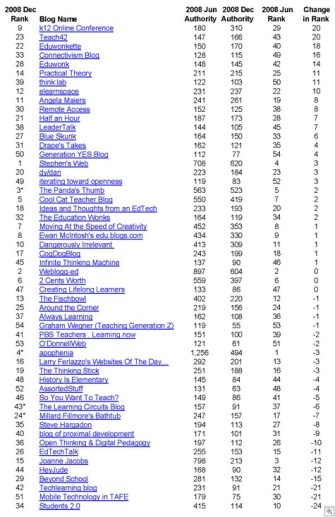 5. Finally, here’s a graphic that shows each blog’s change in rank since June (ordered by overall authority). Red is a decline; green is an increase; blue is no change. 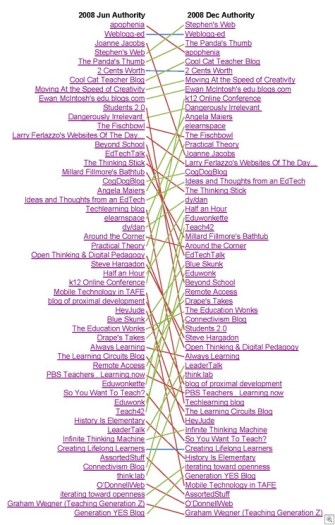 Any of you have thoughts on this fairly esoteric stuff?

I said, they said

My annual review said:nnDr. McLeod’s work with schools is exemplary but inappropriate.nI knew then that, despite the fact that we liked each other a lot, it was time to change […]