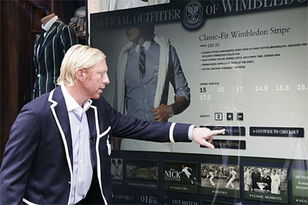 It’s not only innovative technology companies like Apple and Microsoft that are rolling out cool new touch screen applications. Ralph Lauren recently announced plans to roll out a touch screen application that completely re-defines what it means to do a little window-shopping. Engadget reports on a touchscreen innovation in the center of London:

thing is getting a little out of hand. In the latest example of

at its London flagship store into a giant touchscreen shopping experience as part of its Wimbledon marketing campaign. Much like Microsoft’s Surface Table,

the 78-inch window is coated with touch-sensitive foil, and the image

Ralph’s latest duds and even take in a tennis lesson or two. Purchases

away that $75 pink polo by saying you accidentally brushed the screen.”