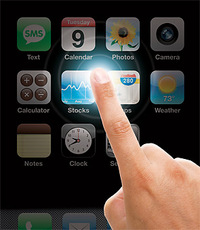 Every now and then, there’s a paradigm shift within an industry or field. Sometimes the change is subtle, other times, it is in-your-face obvious. The roll-out of the Microsoft Surface computer within months of the Apple iPhone launch signal a paradigm shift in the way that we interface with our digital devices.

Writing in TIME magazine, Lev Grossman talks about the new paradigm of touch in one of the most compelling tech articles I’ve read this year:

“The two best demos I’ve seen this year were from

they were in many ways demos of the same product. One is a gimme: the

iPhone, Apple’s brilliant deconstruction of the common cell phone, due

out June 29. The other is a product mysteriously code-named Milan, from

a new branch of Microsoft called, not much less mysteriously, surface

computing. What the two have in common is a very advanced touch screen.”

As Grossman explains, the Apple iPhone completely changes our notion of what touch screens are supposed to do:

been conditioned to hate touch screens; we’ve all spent way too much

grubby, unresponsive touch screens on ATMs. But the iPhone’s screen is

another animal altogether. It’s extremely sensitive, like a trackpad,

but not oversensitive. There’s software in there designed to filter out

groping for. Unlike a trackpad, which goes berserk if you try to touch

it in two places at once, the iPhone’s touch screen can handle multiple

touches… The iPhone takes the

viewing a little world where data are objects, and instead of just

pressing your nose up against the glass, you can reach in and pinch and

touch those bits and bytes with your hands. The word is made flesh. Any

realer and it would be Tron.”

What’s fascinating is that Microsoft seems to have stumbled on the same idea, but via a completely different type of technology:

an iPhone the size of a coffee table, and you’ll have some idea of what

Microsoft has been working on for the past five years. Milan is, in

fact, a table, with a large touch screen for a tabletop; the format

games. Like the iPhone, Milan’s screen can accommodate multiple touches

at once. My first reaction was that I was looking at a patent death

match in the making, but the underlying mechanisms turn out to be very

: Milan uses a system of infrared cameras to keep track of

With Microsoft and Apple leading the way, what’s next for the technology industry?

“Touch screens are unlikely to stop there. They’re

just too useful. Once you use an iPhone, you’ll get twitchy fingers.

to jump backward and forward in your browser. The touchability exposes

the mouse as the crude finger substitute that it really is. Look at the

success of Nintendo’s Wii, which works on the same principle,

converting physical movements into virtual ones. People are ready to

the data. This is manual-free computing, instinctive and intuitive,

What do you think — will 2007 be defined by the new “touch paradigm” created by the likes of Mr. Softee and Apple?