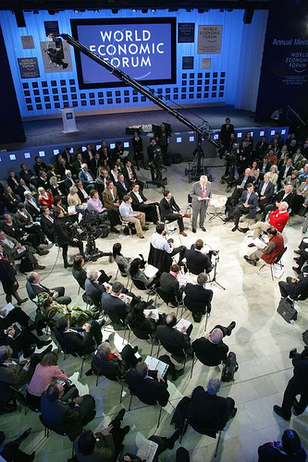 nWith the global financial markets in turmoil, this year’s World Economic Forum event in Switzerland couldn’t have come at a better time. Look for global leaders to give us an idea of what’s on tap over the next 12 months. The event kicks off tomorrow (January 23) with a mega-brainstorming session, in which global leaders and other luminaries attempt to “identify the most pressing threat to growth and prioritize a plan of action.” Over the next 4-5 days, leaders will discuss the innovative ideas that could change the world. Interestingly, the overarching theme of this year’s Davos event is The Power of Collaborative Innovation:

“Looking to the future, it becomes readily apparent that complexity,ncompeting interests and scarce resources remain the greatest obstaclesnto progress on the global agenda in the absence of greater leadershipnand global stewardship. It is in this challenging context that thenWorld Economic Forum will highlight The Power of Collaborative Innovation as the principal theme for the Annual Meeting 2008 in Davos.

A “shifting power equation” was the framework in which the globalnagenda was discussed in Davos at the beginning of 2007. As we lookntowards 2008, this shift will continue to influence the strategies ofnbusiness, government and other stakeholders in the world economy. Butncloser examination of the international environment also reveals thatnleadership vacuums are beginning to emerge on a wide range of criticalnissues looming on the horizon. Moreover, a paradox has emerged in ournnetworked world where knowledge is ubiquitous and change is rapid, butnthe absence of a common vision and agenda ensures that the status quonwill be maintained with respect to major global challenges.nThe focus on collaboration and innovation underscores thenopportunity to leverage the Forum’s multi-stakeholder model so thatnplatforms can be built for like-minded communities to initiatennecessary changes together.”

This theme of Collaborative Innovation will be presented against the backdrop of five different areas: business, economics & finance, geopolitics, science & technology, and values & society. There’s even a Davos YouTube site, in which up-and-coming thought leaders have already posted their videos of how to make the world a better place.

How to create a culture of innovation

Over at the Architectural Record, there’s a fascinating article on how to create an innovative “studio culture” within any firm. The results may surprise you — to some extent, the […]