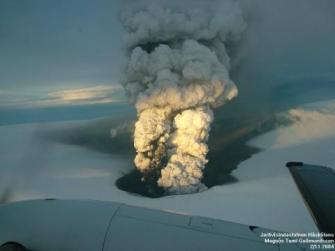 Welcome to version 2.0 of Eruptions, the blog on volcanic eruptions and volcano research in general. I’ve been writing this blog (starting over on WordPress) over the last year or so, but now it has found a new home here at ScienceBlogs. If you’re wondering what to expect if you’re new to Eruptions, I’ll be bringing news of volcanoes that are erupting worldwide, distilling the scientific jargon, dispelling the misinformation and commenting on what the effects of the eruption(s) might be. I’ll also try to bring in any volcanoes in the popular media that gets my attention (alas, it has been almost 15 years since Hollywood’s brief fixation with volcanoes that brought us Dante’s PeakandVolcano), along with current research on the phenomenon of volcanic eruptions and magmas within the Earth. When things get quiet – volcanically speaking – I’ll continue rolling out volcano profiles as well.

Who am I to bring you this? Well, a geologist, for one. A geologist who happens to study volcanoes. I’m not a physical volcanologist – one who studies the physical processes that go on during an eruption, such as ash fall, pyroclastic flows or lahars – but rather I study the magmas that drive volcanism. Specifically (for those of you who enjoy the gory details), I study the crystals in magma. Pick up almost any volcanic rock and if you look at it close enough, you’ll see crystals in it (except obsidian … it is volcanic, but usually is entirely glass). These crystals contain a treasure-trove of age, compositional and thermal information about the magma in which the crystals found themselves. I try to extract that information through microanalysis – examining the crystals on the micron, or .0001 cm, scale – and dating using radioactive elements such as uranium, thorium and radium. If you’re really curious about what I do, check out my research.

So, sit back and enjoy the volcanic action.

Related
Life
Visualization test
Lorem ipsum dolor sit amet, consectetur adipiscing elit. Nullam id tincidunt mi. Morbi malesuada nulla sit amet est hendrerit tincidunt. Etiam viverra, nisl id volutpat eleifend, est augue sodales orci, […]
L&D Strategy
Transfer of learning: The necessary step to make learning stick
Transfer of learning is a concept that should be top-of-mind when planning any learning and development program. Why? In a perfect world, the billions of dollars organizations collectively spend every […]
Starts With A Bang
Why we’ll never see back to the beginning of the Universe
We thought the Big Bang started it all. Then we realized that something else came before, and it erased everything that existed prior.
Thinking
Is there an afterlife? See how your answer compares to polled Americans
There is more consensus on what heaven looks like than hell.
Thinking
How science changes the way we think, according to 10 leading scientists
A group of prominent scientists shares how research has changed them.
Up Next
Guest Thinkers
Condoms and Cal-OSHA: AIDS Healthcare Foundation Tells Larry Flynt to Wrap It Up
Last week, the indefatigable AIDS Healthcare Foundation launched the latest salvo in its long running battle to pressure California’s occupational health and safety agency to enforce the bloodborne pathogens standard […]