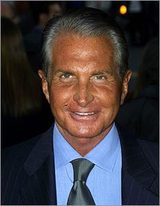 On Thursday, the Wall Street Journal featured a “Boss Talk” interview with George David, the CEO of United Technologies. Apparently, the guy is such an intellectual powerhouse that his aides refer to him behind his back as a “tanning booth”: “Chief Executive George David is often described by senior executives as

the professor they wish they’d had in business school. Those who find

Mr. David’s as “the tanning booth” because of the intense nature of so

much face time with the boss.”

In an unrelated Business Week article, there’s more about the “brainy boss” at United Technologies. Apparently, Mr. David grew up the son of a Rhodes Scholar in an intellectual household before attending Harvard and then the University of Virginia Darden School of Business.