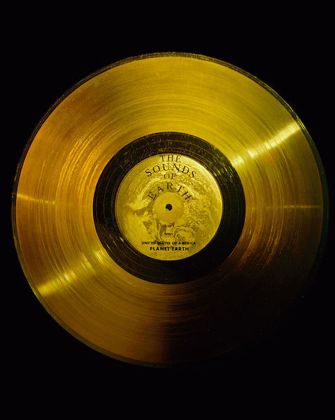 Voyager 1 and 2 were launched in 1977, with the idea that, after a little exploration of our own solar system, they’d keep going and going into the “billions and billions” of stars. Wherein maybe, just maybe, they’d find an alien civilization to bump into.

Anticipating that, both Voyagers carried with them, housed in a sturdy aluminum jacket, a copper record plated with gold, and it had multiple hours of human sounds — music, words, and even analog images. (Since this was 1977, the images are encoded on the record, and have to be decoded. DVDs and MP3s didn’t exist then, you see. Does that make you feel old? It does me.)

Voyager recording cover — image public domain. For an explanation of what all of that means, here’s a guide.

The primary missions of both Voyager spacecraft were to explore Jupiter and Saturn (Voyager 1) and Uranus and Neptune (Voyager 2), but the folks behind the mission knew that after completing those primary missions in 1989 — 12 years after their launch — they would be sent on the Voyager Interstellar Mission to explore space beyond our solar system. Carl Sagan was head of the NASA committee that decided what that whole golden record thing would look and sound like.

There were 12 copies of it made, all but 2 of which went to NASA entities, and one to then-President Carter. (No, Carl Sagan never received one.)

The other 2, of course, are onboard the crafts designed to carry them far beyond our solar system.

And so they have: Both Voyager 1 and Voyager 2 have made it to interstellar space. They’re now about 20 billion kilometers away from Earth (V1) and 16 billion (V2). 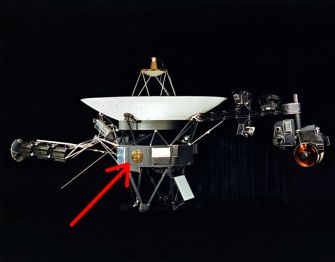 The location of the record on the spacecraft. Image public domain.

So … what’s on that record?

Music — everything from Beethoven to Chuck Berry to a Peruvian wedding song, 118 images, and greetings in almost 60 human languages — and 1 whale language. Plus animal sounds, thunder, morse code, and more.

It was available for a short time as a CD-ROM in 1992, you can find various snippets of the record online, and some of the sounds were released by NASA to Soundcloud, but this is the first time it can be available for us all back on Earth who haven’t heard it, because there’s a Kickstarter by Ozma Records to make all of that available for us Earthlings to hear; when it succeeds, we can look forward to listening to — and seeing — the same things as whatever beings Voyager 1 and 2 encounter in their travels.

The project intends to release it on vinyl (a 3-record non-gold set), as well as in MP3 format.

Meanwhile, I think I’ll go re-watch Cosmos again, just to remind myself of how much of a visionary Carl Sagan really was.

Music and sounds only seem to reduce pain in mice when played at a specific volume.
Neuropsych

Here’s what your music preferences reveal about your personality

Musical preferences are correlated with personality traits. This connection exists across cultures and continents.
High Culture

Who were the greatest female classical composers in music history?

For centuries, men prevented women from writing music. These classical composers broke with social norms and made their mark on history.
Hard Science

It’s not just the language of love.
Up Next
Culture & Religion

Study: How You React to Facebook Likes Is Linked to Self-Esteem

Have you ever refreshed your social media page, tallying each new like or lamenting that there are none? A new study reveals what that says about your self-esteem and your sense of purpose.