Astronomers at the University of Minnesota Duluth and the North Carolina Museum of Natural Sciences have just discovered a galaxy unlike any other in the observed universe. Its name is thoroughly unsexy: PGC 1000714, which is its catalog number, but the new find is a very remarkable and rare one: it’s a ring galaxy.

PGC 1000714 is the first observed ring galaxy of its kind. Ring galaxies have an elliptical core surrounded by a ring of stars. As George Dvorsky points out in an article on the new discovery in Gizmodo, ring objects are very rare in and of themselves: fewer than 0.1% of known galaxies are ring galaxies. PGC 1000714 is not only an instance of a very rare type, but it is unique enough among them to warrant its own sub-classification: it has not one but two distinct rings. 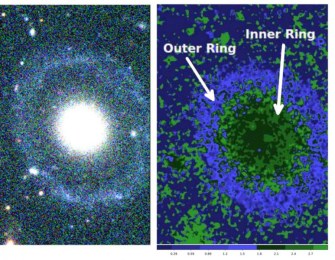 Astronomers are hopeful that PGC 1000714’s unique features will provide some answers to questions surrounding the how galaxies form. Ring galaxies are particularly mysterious, as astronomers remain unsure of how they form at all. The discoverers’ analysis of the galaxy demonstrates that the core and the two rings formed at separate times. An article from the North Carolina Museum of Natural Sciences provides an overview of the scientists’ methodology.

While the researchers found a blue and young (0.13 billion years) outer ring, surrounding a red and older (5.5 billion years) central core, they were surprised to uncover evidence for a second inner ring around the central body. To document this second ring, researchers took their images and subtracted out a model of the core. This allowed them to observe and measure the obscured, second inner ring structure.

The core, as is typical of ring galaxies, formed long before and independently of the rings. The article continues:

Galaxy rings are regions where stars have formed from colliding gas. “The different colors of the inner and outer ring suggest that this galaxy has experienced two different formation periods,” [lead author Burcin] Mutlu-Pakdil says. “From these initial single snapshots in time, it’s impossible to know how the rings of this particular galaxy were formed.” The researchers say that by accumulating snapshot views of other galaxies like this one astronomers can begin to understand how unusual galaxies are formed and evolve.

The rings themselves formed independently too.

PGC 1000714 is a new kind of galaxy that tests existing ideas in astronomy. Astrophysicist Patrick Treuthardt, one of the co-authors of the study, noted, “Whenever we find a unique or strange object to study, it challenges our current theories and assumptions about how the universe works.” This discovery raises many interesting and perplexing questions and, hopefully, helps to pave the way to some answers about how galaxies form.

Here’s the lead author on the finding, Burcin Mutlu-Pakdil:

Quasars: how to feed a supermassive black hole

A new model addresses a longstanding problem: where do quasars get the fuel they need to outshine entire galaxies?
Up Next
Surprising Science

New study suggests many people select mates who share their height and BMI.