Dark matter is believed to be important stuff, the glue that holds together the dust, gas, and stars that make up galaxies. It’s the organizing force for the universe’s large-scale structure, the shape you’d see if you were able to zoom way, way out, and it comprises most of a galaxy’s mass.

We don’t know precisely what dark matter is, since it doesn’t emit or reflect light, or absorb it for that matter, rendering it invisible to our instruments. However, we can see what dark matter does, insofar as light from objects behind dark matter warps and is magnified as it makes its way toward us. That visual distortion is referred to as dark matter’s “lensing” effect, as it’s similar to what you might see passing a magnifying glass over an object.

Now a new study of images from the Hubble Space Telescope combined with spectra from the European Southern Observatory’s Very Large Telescope (VLT) in Chile finds that there’s either a lot more dark matter than computer models predict, or there’s a major puzzle piece missing from what we thought we knew about dark matter’s behavior. 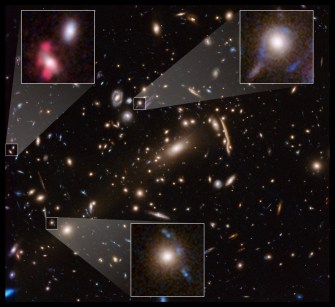 The discrepancy has to do with images of three galaxy clusters captured by Hubble’s Wide Field Camera 3 and Advanced Camera for Surveys as part of two Hubble projects: The Frontier Fields and the Cluster Lensing And Supernova survey with Hubble (CLASH) programs. The three clusters are called MACS J1206.2-0847, MACS J0416.1-2403, and Abell S1063.

Such imagery can be used for authenticating — or exposing flaws in —predictive computer models of dark matter’s behavior, locations, and concentrations.

Lead author Massimo Meneghetti of the INAF-Observatory of Astrophysics and Space Science of Bologna, Italy, says that “galaxy clusters are ideal laboratories in which to study whether the numerical simulations of the Universe that are currently available reproduce well what we can infer from gravitational lensing.”

The assumption has been that the greater the lensing effect, the higher the concentration of dark matter.

The researchers used spectrographic data from the VLT to determine the mass of these smaller lenses. Pietro Bergamini of the INAF-Observatory of Astrophysics and Space Science in Bologna, Italy explains, “The speed of the stars gave us an estimate of each individual galaxy’s mass, including the amount of dark matter.” The leader of the spectrographic aspect of the study was Piero Rosati of the Università degli Studi di Ferrara, Italy who recalls, “the data from Hubble and the VLT provided excellent synergy. We were able to associate the galaxies with each cluster and estimate their distances.”

This work allowed the team to develop a thoroughly calibrated, high-resolution map of dark matter concentrations throughout the three clusters.

“The results of these analyses further demonstrate how observations and numerical simulations go hand in hand,” notes one team member, Elena Rasia of the INAF-Astronomical Observatory of Trieste, Italy. Another, Stefano Borgani of the Università degli Studi di Trieste, Italy, adds that “with advanced cosmological simulations, we can match the quality of observations analyzed in our paper, permitting detailed comparisons like never before.”

“We have done a lot of testing of the data in this study,” Meneghetti says, “and we are sure that this mismatch indicates that some physical ingredient is missing either from the simulations or from our understanding of the nature of dark matter.” Priyamvada Natarajan of Yale University in Connecticut agrees: “There’s a feature of the real Universe that we are simply not capturing in our current theoretical models.”

Given that any theory in science lasts only until a better one comes along, Natarajan views the discrepancy as an opportunity, saying, “this could signal a gap in our current understanding of the nature of dark matter and its properties, as these exquisite data have permitted us to probe the detailed distribution of dark matter on the smallest scales.”

At this point, it’s unclear exactly what the conflict signifies. Do these smaller areas have unexpectedly high concentrations of dark matter? Or can dark matter, under certain currently unknown conditions, produce a tenfold increase in lensing beyond what we’ve been expecting, breaking the assumption that more lensing means more dark matter?

Obviously, the scientific community has barely begun to understand this mystery.

Dr. Sara Walker is an astrobiologist and theoretical physicist, who is questioning the very nature of life and how we’re attempting to find it elsewhere.
▸
6 min
—
with
Sara Walker
Up Next
Starts With A Bang

Will The Most Important Observatory In Astronomy’s History Survive The 2020 Wildfires?

California’s Bobcat Fire has reached Mount Wilson Observatory’s doorstep.100 years ago, our understanding of the Universe was very different from what it is today. Einstein’s General Relativity, our theory of […]