Can information become a source of energy? Scientists from Simon Fraser University (SFU) in Canada devised an ultrafast engine that claims to operate on information, potentially opening up a groundbreaking new frontier in humanity’s search for new kinds of fuel. The study, published in Proceedings of the National Academy of Sciences (PNAS), describes how the researchers turned the movements of tiny particles into stored energy.

How would an information engine even work? The idea for such a contraption, which at first sounds like it would break the laws of physics, was first proposed by the Scottish scientist James Clerk Maxwell back in 1867. Colorfully named “Maxwell’s demon,” such a machine would theoretically achieve something akin to perpetual motion. Maxwell’s thought experiment was meant to show that it may be possible to violate the second law of thermodynamics, which basically states that the amount of entropy, or disorder, always increases.

Maxwell imagined a hypothetical creature, a demon, who would control the opening and closing of a tiny door between two gas chambers. The demon’s goal would be to send fast-moving gas particles into one compartment and the slow ones to another. By doing this, one compartment would be hotter (containing faster molecules) and one cooler. The demon would essentially create a system with greater order and stored energy than what it started with. Without expending any energy, it would seemingly accomplish a decrease in entropy.

A 1929 paper on Maxwell’s demon by the Hungarian physicist Leo Szilard actually showed that the thought experiment would not violate the second law of thermodynamics. The demon, proved Szilard, has to exert some amount of energy to figure out if the molecules were hot or cold.

Over 150 years later, researchers built a system that operates according to the ideas in Maxwell’s thought experiment, turning information into “work.”

SFU physics professor and senior author John Bechhoefer, who was involved in the experiments, explained in a press statement that their group “wanted to find out how fast an information engine can go and how much energy it can extract, so we made one.”

SFU physics professor David Sivak, who led the theorists on the project, said their team made a significant advance in the design of the information engine, having “pushed its capabilities over ten times farther than other similar implementations, thus making it the current best-in-class.”

Their design is akin to a microscopic particle that is submerged in water, while being attached to a spring that is, in turn, connected to a stage that can be moved up. The researchers, playing the role of Maxwell’s demon, observe the particle going up or down due to thermal motion, then move the stage up if the particle randomly bounced upward. If it bounces down, they wait. As elaborated by PhD student Tushar Saha, “This ends up lifting the entire system using only information about the particle’s position.” 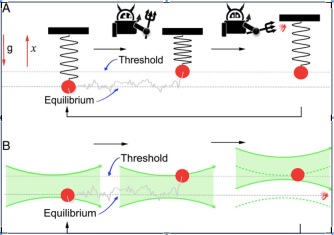 Caption: Schematic of the information engine. (A) Ratcheted spring-mass system under gravity. (B) Experimental realization using horizontal optical tweezers in a vertical gravitational field. Feedback operations on the right side in A and B are indicated by the small red “swoosh” arrows.Credit: TK Saha et al., PNAS, 2021.

Of course, a particle is too small to attach to a spring, so the actual set-up utilized an instrument known as an optical trap, which “uses a laser to create a force on the particle that mimics that of the spring and stage.” As they repeated the process, without pulling the particle directly, the particle was raised to a “great height,” storing up a large amount of gravitational energy, according to the researchers. 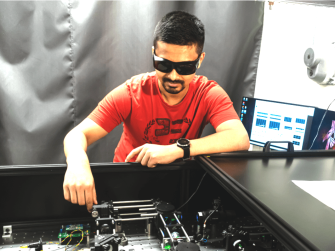 The amount of power this system generates is “comparable to molecular machinery in living cells,” with “speeds comparable to fast-swimming bacteria,” said postdoctoral fellow Jannik Ehrich.

While applications of this still-developing technology are yet to be fully explored, the researchers see potential uses in nanotechnology and nanobiology. Improving computing speed may also be a potential avenue to pursue, according to the researchers

Perhaps wormholes will no longer be relegated to the realm of science fiction.
Up Next
Thinking

Will virtual reality be the death of truth?

A famous thought experiment from the 1970s is more relevant today than ever before.