If you’ve got a thing for gold, you’d better have some money. Not only is the precious metal beautiful, but the amount of it in the universe is finite. A new study concludes that a single neutron star merger some 300 parsecs away produced a significant amount of it. “This means that in each of us we would find an eyelash worth of these elements, mostly in the form of iodine, which is essential to life,” says one of the astronomers involved in the study, Imre Bartos at the University of Florida.

Gold in particular is pretty fascinating stuff — it can even be argued that our individual existences depend on it, as astronomer Michelle Thaller explains.

“There’s gold in your brain.”

What it takes to make gold

As Thaller notes, elements such as gold, platinum, plutonium and others have atoms that are denser and thus heavier than iron atoms. Gold, in particular, is about four times heavier, with each atom containing many more protons and neutrons than iron. Such “heavy” elements are primarily the product of “rapid neutron capture,” or the “r-process.” It takes place in conditions of high neutron density and heat — think violent stellar explosions — that allow a radioactive atomic nucleus to attract free neutrons for an abnormally prolonged interval before its radioactivity begins to decay.

This much as been agreed upon for some time. Until now, though, there’s been a debate as to type of cosmic cataclysm responsible: supernovas or neutron-star mergers? And how many of these explosive events would be necessary to produce the known quantity of heavy elements in the universe? 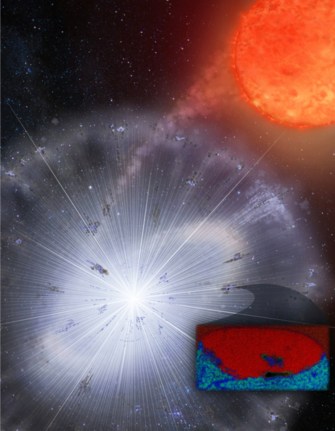 A tiny speck of stardust tells the story

The basis of the researchers’ conclusion is the composition of a unique grain of stardust extracted from an Antarctic meteorite by researchers at the University of Arizona, described last month in a nature astronomy article. An electron-transparent cross-section of grain LAP-149 — just 1/25,000 of an inch in size — was examined to determine its composition.

Lead author of the analysis study Pierre Haenecour tells UA News, “As actual dust from stars, such presolar grains give us insight into the building blocks from which our solar system formed.” The composition of LAP-149 suggests formation in a nova. Haenecour explains the telltale clue was that it’s so highly enriched in a carbon isotope called 13C: “The carbon isotopic compositions in anything we have ever sampled that came from any planet or body in our solar system varies typically by a factor on the order of 50. The 13C we found in LAP-149 is enriched more than 50,000-fold.”

UA’s Tom Zega says: “If we could date these objects someday, we could get a better idea of what our galaxy looked like in our region and what triggered the formation of the solar system.” Meanwhile, he notes, “It’s remarkable when you think about all the ways along the way that should have killed this grain,” particularly during the violent creation of our solar system. 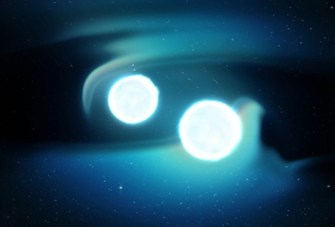 Using the trace amounts found in LAP-149, astrophysicists Bartos and Szabolcs Márka at Columbia University ran a series of computer simulations to see if they could identify the right circumstances — with both supernovas and neutron-star collisions as candidates — that would produce our heavier elements.

They found that a single merger of two neutron stars could do the trick if it occurred about 1,000 light years from the dust and debris that eventually coalesced into our solar system, and if it happened about 100 million years before the solar system, or about 4.6 billion years ago. 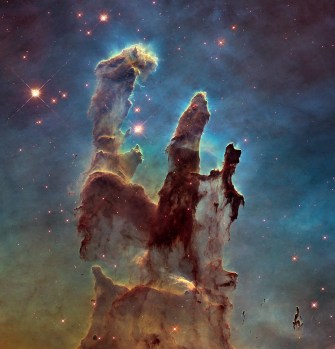 From our explosive beginnings

Zega is struck by the implications of LAP-149: “Perhaps we owe our existence to a nearby supernova explosion, compressing clouds of gas and dust with its shockwave, igniting stars and creating stellar nurseries, similar to what we see in Hubble’s famous ‘Pillars of Creation’ picture.”

As for the team that found the cataclysm from which so much gold came, Márka notes, “Our results address a fundamental quest of humanity: Where did we come from and where are we going? It is very difficult to describe the tremendous emotions we felt when we realized what we had found and what it means for the future as we search for an explanation of our place in the universe.”

The synthetic cartilage was made from cellulose fibers — the stuff found in wood — mixed with a goo called polyvinyl alcohol.
Up Next
The Present

Buying cards and flowers on Mother’s Day would make Anna Jarvis roll around in her grave.