Stephen Hawking argued that space agencies should establish bases on the moon before traveling to Mars, according to Buzz Aldrin. The Apollo astronaut, who was the second man to walk on the moon, made the remarks while accepting the Stephen Hawking Medal for Lifetime Achievement at the Starmus festival in Zürich.

“I was in his office and I had been anxious that we should make a continuous orbit between Earth and Mars. He said, in that computerized voice of his, ‘colonize the Moon first’ and I realized that there are so many things we need to do before we send people to Mars and the moon is absolutely the best place to do that,” Aldrin said, as the Daily Star reports. “And hopefully we can do it with international partners so they can help to pay the bills.” 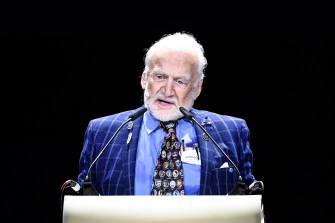 Aldrin recently argued for a return to the moon in an op-ed for The Washington Post.

“The United States’ eyes — and our unified commitment — should focus on opening the door, in our time, to the great migration of humankind to Mars,” Aldrin wrote, adding that this should occur only after space agencies establish “a sustainable international return to the moon.”

Hawking wrote in his final book, Brief Answers to the Big Questions, that he expects “we will be able to travel anywhere in the solar system except maybe the outer planets” within the next 100 years.

Should space agencies first go to the moon or Mars?

It’s an ongoing debate in the space industry. A few benefits of choosing Mars include the prospect of mining for chemicals like methane, which could be used for fuel; terraforming the planet to someday support a liveable atmosphere; and the possibility of finding extraterrestrial life. Meanwhile, establishing bases on the moon would be easier, safer and cheaper; regular imports could sustain lunar colonies; and the low gravity of the moon would make it relatively easier to manufacture materials and heavy equipment for space missions.

While companies such as SpaceX and Mars One are planning voyages to the Red planet, NASA has chosen to send astronauts back to the lunar surface in 2024. NASA then plans to build what it calls a deep space gateway, which would be a small space station that orbits the moon and supports four astronauts at a time, serving “as a gateway to deep space and the lunar surface.” In a later phase of missions, NASA would use that gateway to launch a reusable spacecraft to other destinations in the solar system, including Mars.

“For tens of thousands of years humans have followed a pattern on Earth: imagination, to technology-enabled exploration, to settlement,” he said. “It’s how the first humans got to Australia 50,000 or 60,000 years ago, and how we went from Yuri Gagarin and Alan Shepard orbiting Earth to the first people putting footprints on the moon, to people living in orbit.”

NASA hasn’t provided a firm timeline for putting humans on Mars, but missions could take place in the 2030s. SpaceX aims to put humans on Mars by 2024, though some say that timeframe is aspirational. Mars One aims to send astronauts to Mars by 2031.

Meanwhile, Blue Origin plans to send humans to the moon and establish a permanent lunar colony in 2024. Amazon CEO Jeff Bezos, who also owns Blue Origin, recently spoke about his company’s lunar aspirations at the re:Mars conference in Las Vegas.

“To do big things in space, we need to use in-space resources, and so the moon is great. The reason we go to space, in my view, is to save the Earth. [If] we are going to continue to grow this civilization, we need the moon,” he said. “I’m talking about something that our grandchildren will work on and have their grandchildren work on, and so on. This isn’t something that this generation is going to accomplish, but we need to move heavy industry off Earth. It will be better done in space anyway. It will be way easier in space, and Earth will be zoned residential and light industry.”

A universal basic income is just one of Andrew Yang’s ideas to update capitalism for the 21st century.