This GIF shows the fireball created by Shoemaker-Levy 9’s first impact with Jupiter.

In the two years leading up to 1994, astronomers had eagerly watched the progress of a comet called Shoemaker-Levy 9 as it journeyed through our solar system. It was the first comet to be observed orbiting a planet — Jupiter, in this case — and over the years, the gas giant’s gravity had ripped the comet apart into several fragments up to 1.2 miles in diameter, swirling around at 134,000 miles per hour.

The comet itself wasn’t what had attracted astronomers — instead, it was the chance to observe the predicted impact of Shoemaker-Levy 9 with Jupiter. And when Shoemaker-Levy 9 finally did strike Jupiter in July of 1994, there was one hell of an explosion. When the first fragment tore into the planet, a nearly 2,000-mile-high fireball exploded with temperatures in excess of 42,000 Fahrenheit.

It’s not the only time Jupiter’s been hit, too. Some studies estimate that the gas giant gets hit 8,000 times more than Earth. But that number might even be higher — we can’t directly observe the far side of Jupiter, after all, and the Shoemaker-Levy 9 collision was one of the first times we thought to even look for celestial bodies impacting Jupiter. It makes sense: Not only is Jupiter a huge target, its mass attracts celestial bodies as they pass through our solar system.

So, this begs the question: What if we didn’t have Jupiter in our solar system to suck up these rogue asteroids and comets? 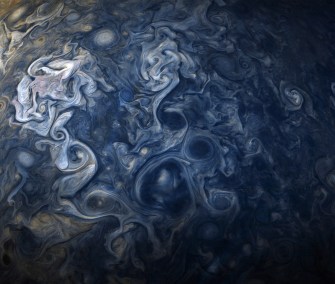 How Jupiter protects us

Jupiter is big. Really big. Like a celestial clown car, Jupiter is so large that about 1,300 Earths could comfortably fit inside it. It’s incredible girth is also an incredible boon for Earthlings. Jupiter attracts many asteroids and comets like Shoemaker-Levy 9 that, if not for Jupiter, might have struck the Earth.

Famously, one such asteroid snuck by and hit Earth about 65 million years ago, setting off a chain reaction that would ultimately lead to the extinction of the dinosaurs and provide mammals like us a shot at global domination. Now that humans are on top, we would very much like to stay there. Indeed, chances are a second major impact wouldn’t be so fortuitous for us as the first was. Not only that, but if Jupiter were not there to suck up all of these other asteroids and comets, life may not even have had a chance to begin on Earth at all.

As it turns out, solar systems with planets like Jupiter are fairly uncommon in the galaxy. This fact, coupled with Jupiter’s protective role in our own solar system, lends credence to what scientists call “the rare Earth hypothesis.”

One of the big mysteries in astronomy and astrobiology is how devoid of life the universe apparently is. Noting the many billions of stars similar to the sun, the probability of Earth-like planets orbiting those stars, and the probability of intelligent life to develop on those planets, physicist Enrico Fermi first asked the question “Where is everybody?” This would later become known as the Fermi paradox.

This paradox was put more formally by Frank Drake in the Drake equation, which lays out a statistical basis for estimating the number of intelligent civilizations in the Milky Way. His original estimates stated that there were between 1,000 and 100,000,000 civilizations in the galaxy. As we learned more about the universe, scientists have managed to narrow this number down. Current estimates put humanity’s chance of being totally alone in the galaxy at 39 percent.

Part of why this is the case is because of Jupiter. Only about 1 in 1,000 stars are both similar to the sun and have a Jupiter-like planet with a relatively stable orbit in the outer rings of the solar system. When a Jupiter-like planet’s orbit is a bit more eccentric than ours is, gradually the gas giant’s orbit starts to bend towards its star. On its way, the planet rips apart any material that would have otherwise eventually formed into a planet like Earth. When they get close to their star, they become “hot” Jupiters.

Trump orders limits on asylum for migrants at U.S.-Mexico border

In an extraordinary claim of presidential power, President Donald Trump signed a proclamation Friday that will restrict asylum for migrants for 90 days.