Since 2016, NASA’s Juno spacecraft has been observing Jupiter’s atmosphere, magnetosphere, and gravitational field. It has already managed to take fantastic images, discovered new cyclones, and analyze the gasses that make up the planet in the time it has spent investigating it.

This week, Juno was able to add another discovery to its name with the unexpected finding of lightning in the upper atmosphere of the Solar System’s largest planet.

The findings are described in the study “Small lightning flashes from shallow electrical storms on Jupiter,” published in Nature. Previous missions to Jupiter, including Voyager 1, Galileo, and New Horizons all observed lightning, but without the benefits of the equipment on Juno or more recent developments in models of the Jovian atmosphere.

In this case, the lighting is notable for how high it is occurring in the atmosphere. While previous observations suggested lightning in water-based clouds deep inside the gas planet, the new data suggests lightning exists in the upper atmosphere in clouds of water and ammonia. This lightning is dubbed “shallow lightning.”

According to a press release by Cornell University, the ammonia is vital in creating the lightning, as it functions as an “anti-freeze” of sorts to keep the water in the clouds from freezing. The collision of droplets of mixed ammonia and water with ice water particles creates the charge needed for lightning strikes.

This is different from any process that creates lightning on Earth.

That wasn’t the only bit of strangeness the probe noticed. While Juno saw plenty of ammonia near the equator and at lower levels of the atmosphere, it was hard-pressed to find much anywhere else. To explain this, researchers developed a new model of atmospheric mixing. They suggest that the ammonia at lower levels of the atmosphere rises into storm clouds, interacts with water to cause the aforementioned lightning, and then falls back down in the form of hailstones.

The scientists gave these ammonia and water ice hailstones the name “mushballs.”

This model explains many things, including why Juno couldn’t detect ammonia where it expected to: the mushballs would be more challenging to detect than ammonia or water vapor. The scientists further speculated that the weight of the mushballs pulls the ammonia to lower levels of the atmosphere where it is detected in more significant amounts. 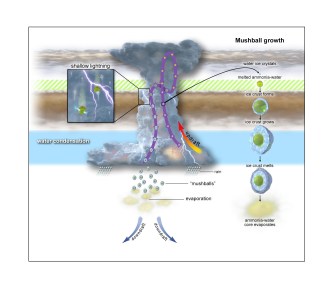 A NASA designed graphic demonstrating the weather systems theorized to create “mushballs.” The liquid water and ammonia rises in the storm clouds until they reach points where the extremely low temperatures cause them to freeze. Freezing into semi-solid “mushballs” causes them to fall where they redistribute ammonia throughout the lower atmosphere. Credit: NASA/JPL-Caltech/SwRI/CNRS

Hey Bill Nye! How Will We Search for Life on Jupiter’s Moon, …

Juno relies on several pieces of equipment. The most relevant in this case is the microwave radiometer. This device uses microwaves to measure the Jovian atmosphere’s composition. When microwaves hit water or ammonia particles, they begin to heat up. By hitting the planet with microwaves and then looking for changes in the particles’ observed temperature, the probe can determine what chemicals are present.

The findings of these studies demonstrate that Jupiter’s atmosphere is more complicated than previously thought. Given how we already knew about the storms larger than Earth, temperatures that swing between extremes in different layers of the atmosphere, and winds that blow at 100 meters per second, that is saying something.

Hey Bill Nye! How Will We Search for Life on Jupiter’s Moon, …

Is CRISPR the solution?