They’re called “large low-shear-velocity provinces” (LLSVPs), and they’re large anomalous globs of, well, some kind of rock deep inside the Earth. There’s one under Africa and the other is beneath the Pacific Ocean. Together, they’re apparently producing the South Atlantic Anomaly, a massive region of lower magnetic intensity sufficient to weaken the planet’s corresponding magnetic field. This provides less protection from cosmic rays for our orbiting spacecraft, and some wonder whether its presence signals a flipping of the planets magnetic poles. It’s believed the anomaly is nothing new, reappearing now and again for at least 11 million years and likely much longer.

A theory from researchers at Arizona State University (ASU) presented this month at the Lunar and Planetary Science Conference may explain what the LLSVPs actually are: They’re what’s left of the protoplanet Theia that crashed into the young Earth about 4.5 billion years ago, shearing off the debris that eventually became our Moon. 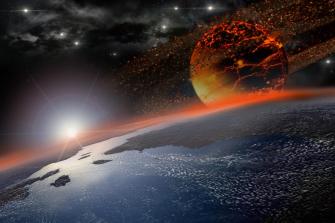 According to a widely held hypothesis, Theia was an at-least Mars-sized object that obliquely collided with Earth. It’s a good thing it just glanced off us, too, since a direct hit would have obliterated our planet entirely. As it was, it’s theorized, two big chunks were ejected from the collision, forming two moons that eventually coalesced into the one we see today.

The authors of the new research, led by ASU’s Qian Yuan, explain in a summary of their findings: “Such a model is well-aligned with some key physical aspects of Earth-Moon system, including anomalous high angular momentum of Earth-Moon system, small iron core of the Moon and its high mass ratio compared to the Earth.”

But if Theia was real, where did it go? The authors write, “The Giant Impact hypothesis is one of the most examined models for the formation of the Moon, but direct evidence indicating the existence of the impactor Theia remains elusive.” It’s reasonable that some material from both bodies was destroy. How much of Theia was captured has remained an open question.

Scientists have conclusively determined that the LLSVPs exist, though their origin and composition is unresolved. The ASU researchers say that while they could be thermal in origin, seismological examination reveals that they have distinct margins separating them from surrounding rock and are much denser chemically, suggesting that they’re not of a piece with the rest of the mantle.

The researchers’ modeling of Theia’s likely composition supports the idea that its mantle was several percent denser than Earth’s, and iron-rich, which would mean that after the bodies collided, the Theia mantle material could “sink to Earth’s lowermost mantle and accumulate into thermochemical piles that may cause seismically observed LLSVPs.”

The theory proposed in the new research, which is being evaluated for publication in the journal Geophysical Research Letters, has been proposed before. However, the ASU researchers have presented what may be the best supporting evidence for it yet. Yuan says his research supports the LLSVP-Theia connection in four ways: