Putting humans on Mars is the next giant leap in space exploration, yet it remains a far-off goal for national and private space agencies. There’s no shortage of complications. With all the economic, technological, and safety hurdles to overcome, some critics say sending manned missions to the Red planet simply doesn’t make sense. This thinking explains, in part, why NASA’s current long-term strategy is to first return astronauts to the moon in order to “demonstrate capabilities required for human missions to Mars and other destinations.”

But that hasn’t stopped space agencies from planning unmanned Mars missions for the near future and, more aspirationally, manned missions after that.

Three unmanned Mars missions are set to launch in summer 2020. The timing is no coincidence: Once every two years, Earth and Mars come especially close together because their orbits are “at opposition,” which is when the Earth-Mars distance is smallest during the 780-day synodic period. This is an opportune window to send spacecraft to Mars. 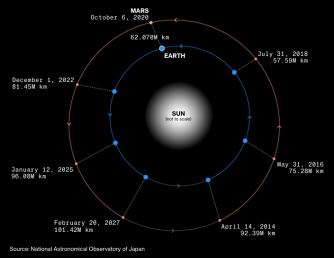 As far as a manned mission to Mars? It could happen in the 2020s, but that seems unlikely. But whenever it does, it could mark the beginning of an era where humans live on the Red planet in permanent, large-scale settlements. For example, by 2117, the U.A.E. wants to build a massive Martian city of 600,000 inhabitants, while SpaceX CEO Elon Musk has said that it is “possible to make a self-sustaining city on Mars by 2050, if we start in 5 years & take 10 orbital synchronizations.”

For now, three space agencies plan to launch unmanned Mars missions in 2020, while several others hope to launch Martian projects later in the decade.

This summer, NASA plans to send an unmanned rover to the Red planet for its Mars 2020 mission. A key objective of this mission, which will include deploying a small autonomous helicopter, is to find evidence of extraterrestrial life, not only by “seeking signs of habitable conditions on Mars in the ancient past, but also searching for signs of past microbial life itself,” NASA writes on its website.

But the agency doesn’t plan to send people to Mars anytime soon. NASA first wants to return humans to the moon, aiming to “land astronauts on the surface no later than the late 2020s.” The agency has no official timeline for putting humans on Mars, and a 2019 report suggested the late 2030s is the earliest it could do so. 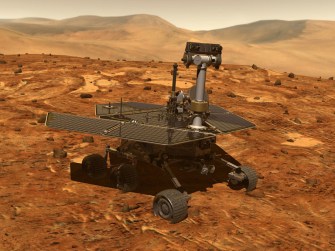 As of May 2020, NASA’s Curiosity rover is still operational, roaming the martian surface at top speeds of 0.086 mph.

In 2019, China successfully landed a rover on the dark side of the moon. This summer, the nation has its sights on an even more ambitious goal: sending an orbiter, lander, and rover to Mars in one trip, something no nation has done before. The mission is called Tianwen-1, meaning “questions to heaven,” and its aim is to search for pockets of water below the Martian surface, while also looking for signs of ancient life.

In July 2020, the U.A.E.’s Mohammed bin Rashid Space Centre plans to launch the Hope Mars Mission, which includes a probe that would orbit Mars and study its weather patterns. For the U.A.E., the mission is designed to push the country toward a knowledge-based economy.

“Going to Mars was not the main objective,” Omran Sharaf, mission lead for the Hope spacecraft, which is also known as the Emirates Mars Mission, told Space.com. “It’s a means for a bigger goal: to expedite the development in our educational sector, academic sector.”

The Hope Mars Mission, if successful, would be the first mission to Mars by any West Asian, Arab, or Muslim-majority country.

In 2024, the Japanese Aerospace Exploration Agency (JAXA) plans to launch a uniquely bold interplanetary mission that will involve sending a probe to orbit Mars, landing on the Martian moon Phobos, collecting surface samples, and then returning those samples to Earth in 2029. JAXA says the mission has two main objectives: 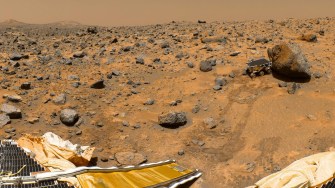 An improved, color enhanced version of the 360-degree Gallery Pan taken by Mars Pathfinder in 1997.

Elon Musk’s aerospace company has its eyes on two Mars voyages: a cargo-only mission in 2022, and a human mission in 2024. The second mission would involve building a propellant depot and preparing a site for future crewed flights. But the company describes these dates as “aspirational.” After all, SpaceX plans to use its Starship spacecraft to send Japanese billionaire Yukazu Maezawa and a handful of artists into lunar orbit in 2023. Musk has suggested this trip would be Starship’s first mission.

Moon first, Mars as soon as the planets align

Regarding the long-term future of humans on the Red planet, Musk once told Ars Technica:

“I’ll probably be long dead before Mars becomes self-sustaining. But I’d like to at least be around to see a bunch of ships land on Mars.”

​Russia and the European Union

Roscosmos and the European Space Agency plan to send a Russian lander and a European rover to the Martian surface in 2022 as part of ExoMars. The mission aims to find out if there has ever been life on Mars, and also to understand the history of water on the planet. It’s part of a long-term Mars project that began in 2016. This second phase was initially planned for 2020, but due in part to the COVID-19 pandemic, the space agencies decided to postpone the mission by two years.

“We want to make ourselves 100% sure of a successful mission. We cannot allow ourselves any margin of error. More verification activities will ensure a safe trip and the best scientific results on Mars,” said ESA Director General Jan Wörner.

In 2014, the Indian Space Research Organization executed its first interplanetary trip with its Mars Orbiter Mission. It marked the first time an Asian nation reached Martian orbit, and also the first time a nation successfully reached the Red planet on its maiden voyage. India has plans for a follow-up Mars Orbiter Mission 2, but it remains unclear when that will occur, and what the mission will entail. Some reports suggest the mission will include a rover and lander, in addition to an orbiter.

What lies in store for humanity? Theoretical physicist Michio Kaku explains how different life will be for your descendants—and maybe your future self, if the timing works out.
▸
with
Michio Kaku
Up Next
Strange Maps

Hey, methane leakers: Now we know where you live