All of the stuff around you — your desk, computer, lukewarm coffee, your body — all of it has undergone a very long journey to get to where it is now. The different elements seem so fundamental we often fail to wonder where they came from; they just seem like they’ve always been there. In fact, the elements of the universe all come from very diverse sources, each with different conditions predisposing the production of, say, osmium over sodium. The figure below shows all of the different sources of the different elements. Here’s what each category means.

Just a few seconds after the Big Bang, everything was too hot to be anything. So hot, in fact, that the four fundamental forces of the universe were sort of “melted” into one force, and most elementary particles could not exist.

As the universe continued to cool, however, new reactions could occur. Quarks and gluons could exist and combine to form protons and neutrons. Between the tenth second and twentieth minute after the Big Bang, the three lightest elements on the periodic table were produced: hydrogen, helium, and a very small amount of lithium. Hydrogen is quite simple — it only needs a proton and an electron to exist. But once it picks up another neutron or two, it can fuse with itself or spare protons to become helium, releasing energy in the process.

The trouble is, the universe was expanding and cooling very rapidly by this point — there just wasn’t enough energy to go around to support the additional fusion reactions that will create the heavier elements. Occasionally, a few rare reactions between isotopes of hydrogen and helium could produce lithium, but the first stars would need to form before more fusion could occur. At this point, all of the matter in the universe consisted of about 75 percent hydrogen and 24 percent helium, with the leftover being lithium.

About 500 million years after the Big Bang, the hydrogen and helium that had been dispersed throughout the universe began to coalesce into clouds of those elements, which became more and more dense, turning into stars.

Stars spend about 90 percent of their lives fusing hydrogen atoms together, which ultimately produces helium. As the star burns off its hydrogen reserves, it begins to collapse inward, becoming dense and hot enough to burn helium, causing it to expand again. Burning helium produces carbon, which burns to produce oxygen, and so on. Massive stars are made of onion-like layers, with the outer layer burning lighter elements, converting them into heavier elements that are burned in the inner layers. This goes on until we reach iron. The energy that binds the particles of an iron atom together is too high to produce energy via fusion. Massive stars that reach this point have no means of generating energy to prop themselves up, so they collapse in on themselves. As the mass of the star collapses into a central point, it bounces back into a supernova.

Here’s where most of the magic happens. The energy from the supernova is enough to force the synthesis of most elements heavier than iron rapidly.

Low-mass stars don’t have enough energy to directly produce heavier elements up to iron like massive stars do, and they don’t explode in supernovae to produce elements heavier than iron. In contrast with the few seconds of elemental creation seen in supernova, dying low-mass stars produce new elements over thousands of years. Here’s how it works: Neutrons in the star bump into lighter elements, creating isotopes of those elements. This continues until the isotope becomes unstable, and the neutron that’s responsible for creating the unstable isotope decay into an electron, an antineutrino, and a proton. The electron and antineutrino shoot off, while the proton stays with the molecule, transforming it into a new element. This process continues, going up the line until lead is created. Actually, a tiny amount of bismuth is produced here as well, but due to the nature of the density and speed of free neutrons in these kinds of stars, the process stops here.

Because space is such a busy place, stars and other high-energy objects are constantly producing cosmic rays, streams of highly charged particles that mainly consist of protons. When these strike objects in space, like moons, our own atmosphere, or other cosmic rays, the collision breaks off protons and neutrons from the matter struck by the ray. As a result, many of the universe’s lighter elements, namely, beryllium, lithium, and boron, are produced in this way. 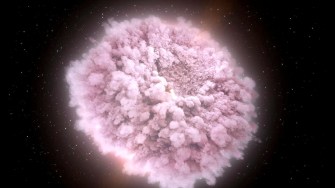 The remains of a neutron star merger.

After a massive star explodes in a supernova, the leftover car is known as a neutron star, so named because their gravity essentially melts the protons and electrons of their material into neutrons.

When two such stars orbit each other, over time, they begin to come closer and closer, speeding up as they do so. When they collide, they produce one of the most energetic events in the universe. When these mergers occur, they produce a staggering number of atoms too heavy to be forged in normal stars. NASA Astronomer Michelle Thaller explains how this works and how most of the gold on Earth (even the gold inside your brains), are produced by such collisions:

Similar to neutron stars, white dwarfs are the leftovers of a dead star. The difference is that white dwarfs aren’t the remains of a supernova; rather, they are made of the leftover remnants of fusion that occurred in stars with smaller masses and are typically composed of carbon and oxygen.

White dwarfs don’t have fusion reactions occurring to support their size against gravity. Rather, they rely on something called the electron degeneracy pressure. Electrons can’t occupy the same state, so they push back against gravity to resist being compressed. If the star had more mass and therefore felt gravity more strongly, the electrons and protons would be compressed into neutrons, forming a neutron star. Neutron stars are supported by neutron degeneracy pressure, but if that’s beaten down by gravity, then you get a black hole.

So, if a white dwarf receives additional mass somehow (usually by siphoning it off of another nearby celestial body), it can run the risk of turning into a neutron star. However, once it approaches the point where its electrons can no longer support the star, it becomes dense and hot enough to kickstart fusion again by burning oxygen. A normal star would, as its fusion processes heat the star up, expand and cool down. But electron degeneracy pressure doesn’t increase as temperature does, so the star can’t expand. Without this regulation, more and more fusion reactions occur in the star, causing greater and greater temperatures, causing more and more fusion. At some point, it’s too much; the star explodes in a type Ia supernova. During these few seconds, many of the remaining elements on the periodic table are fused together.

The remaining elements all have unstable isotopes, meaning that any instances of these elements produced by natural processes would have decayed overtime. As a result, the only way to find these elements is through artificial synthesis.

It’s been commonly said that all elements come from stars, but this is an oversimplification. Some have to be made artificially, some were produced in the Big Bang, and others were made by very different kinds of stars under very different conditions. So, the next time you drink from a soda can, you can safely say that the 1 percent of manganese it contains probably came from an exploding white dwarf. Or, you can point to your silver necklace; it probably came from the merger of neutron stars.

Scientists turn to nature to improve a ubiquitous building material.
Up Next
Health

2019 is on track to becoming a record-high year for measles cases in the U.S.