An astronaut dropped a small mirror during a spacewalk on Friday outside of the International Space Station (ISS), adding to the millions of pieces of space debris currently orbiting the planet.

ISS Space Station Commander Chris Cassidy and NASA astronaut Bob Behnken were upgrading the station’s power system, replacing old batteries during one of four scheduled spacewalks, when a 5-inch by 3-inch mirror came loose from Cassidy’s spacesuit. Astronauts wear small wrist mirrors on the sleeves of their spacesuits to help them see, in part because their helmets limit field of view.

It was dark when the mirror came loose. Cassidy later said he didn’t find any damage when he later inspected his suit in the light, according to The Associated Press. The rest of the six-hour spacewalk was successful and NASA said the 0.1-pound mirror poses no danger to the space station.

One mirror may not cause much trouble, but the millions of pieces of space debris orbiting Earth pose a perennial threat to all space missions. NASA has catalogued more than 20,000 pieces of man-made space junk bigger than a softball, ranging from abandoned launch vehicle stages to fragments leftover from collisions between spacecraft.

“They travel at speeds up to 17,500 mph, fast enough for a relatively small piece of orbital debris to damage a satellite or a spacecraft,” NASA wrote in a blog post. “There are 500,000 pieces of debris the size of a marble or larger. There are many millions of pieces of debris that are so small they can’t be tracked.”

The small, untraceable pieces of space junk — both natural and man-made — are especially dangerous.

“Even tiny paint flecks can damage a spacecraft when traveling at these velocities,” NASA wrote. “In fact a number of space shuttle windows have been replaced because of damage caused by material that was analyzed and shown to be paint flecks.”

To get an idea of how much damage a tiny piece of debris can do at super-high speeds, check out the photo below of what a 0.03-pound piece of plastic did to a block of aluminum. Conducted using a light-gas gun, the pea-sized fragment left a crater in the block that’s about 5 inches deep. 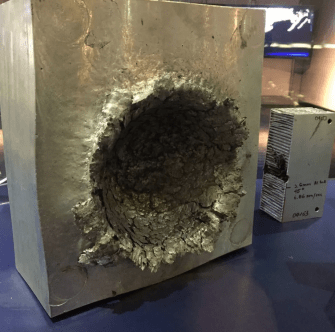 Space junk isn’t a new problem. NASA, for example, has been researching strategies to reduce the amount of space junk orbiting Earth since founding its Orbital Debris Program in 1979. The bulk of space junk exists in low Earth orbit, which the space community views as the “world’s largest garbage dump,” according to NASA.

What’s worse, the dangers of space debris increase as each new object is added to orbit. This is described by the Kessler Syndrome, which is the case where “two colliding objects in space generate more debris that then collides with other objects, creating even more shrapnel and litter until the entirety of LEO is an impassable array of super swift stuff. At that point, any entering satellite would face unprecedented risks of headfirst bombardment.”

Perhaps surprisingly, there are no international laws that explicitly require countries to remove or avoid adding space debris, but the Outer Space Treaty — of which 110 countries are party — notes that space agencies should avoid the “harmful contamination” of outer space. Still, space agencies and researchers have recently been exploring new ways to actively remove space junk from orbit.

One potential solution involves using small satellites — cubesats — to hunt down and deorbit space junk using nets and tethers. Called OSCaR (Obsolete Spacecraft Capture and Removal), the satellites would be transported into orbit aboard larger spacecraft, and then would find and remove space junk mostly autonomously.

“We tell OSCaR what to do and then we have to trust it,” project leader Kurt Anderson, a professor of mechanical, aerospace and nuclear engineering at Rensselaer Polytechnic Institute in New York, said in a statement. “That’s why this problem actually gets very hard, because we are doing things that a big, expensive satellite would do, but in a CubeSat platform.”

What lies in store for humanity? Theoretical physicist Michio Kaku explains how different life will be for your descendants—and maybe your future self, if the timing works out.
▸
with
Michio Kaku
Up Next
Health

As belly size gets larger, the memory center in the brain gets smaller