The final book from Stephen Hawking, the late theoretical physicist and cosmologist, was released Tuesday under the title Brief Answers to the Big Questions.

Hawking, who lived most of his life with the neurodegenerative disorder amyotrophic lateral sclerosis (ALS), was still working on the book when he died in March. The work was completed by his family and publishers, who filled in the gaps by drawing on an “enormous personal archive” of essays, interviews and articles from Hawking’s half-century career.

Brief Answers to the Big Questions is divided into 10 chapters, each of which is posed as a question: “What is inside a black hole?”, “How did it all begin?” and “Is there a God?” Hawking’s answer to the God question is a resounding “no.”

“There is no God. No one directs the universe,” he writes. “For centuries, it was believed that disabled people like me were living under a curse that was inflicted by God. I prefer to think that everything can be explained another way, by the laws of nature.”

This sentiment, by the way, is far clearer than what Hawking famously wrote in his 1988 bestseller A Brief History of Time: “If we discover a complete theory, it would be the ultimate triumph of human reason – for then we should know the mind of God.”

Hawking touched upon the existence of alien life.

“There are forms of intelligent life out there,” he wrote, adding, “we need to be wary of answering back until we have developed a bit further.”

He also argued that traveling back in time can’t be ruled out, artificial intelligence might someday outsmart humans and “within the next hundred years we will be able to travel to anywhere in the Solar System.” 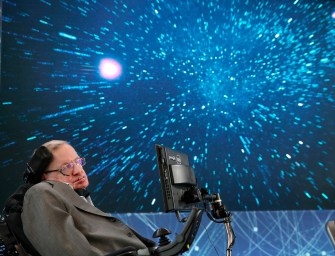 Hawking’s final book probably won’t have a big impact in the scientific world. Still, as Matin Durrani writes for Physics World, there’s a good chance the book will strike a chord with a popular audience.

“Brief Answers to the Big Questions will appeal to school students, undergraduates and non-scientists with an appetite for the grand challenges in physics. Those who are more familiar with cosmology, relativity and astronomy will not find much that is new, although it is always interesting to see Hawking’s take on affairs. In essence, this book – especially the final chapter “How do we shape the future?” – will stand as Hawking’s manifesto. Optimistic, upbeat and visionary, it sees science – and scientific understanding – as vital for the future of humanity.”

At a book launch event on Monday in London, organizers played some remarks from Hawking lamenting the changing ways in which scientists are received in the culture.

“With Brexit and Trump now exerting new forces in relation to immigration and the development of education, we are witnessing a global revolt against experts, and that includes scientists,” Hawking said.

No, Not All Opinions Are Equal—We Need Elites with Expert Knowledge

Richard Dawkins on the elitism backlash

Books that were rarely taught in 1963, when baby boomers were students, became classics when those same boomers were teachers and parents.
Up Next
Hard Science

The Ocean Cleanup’s System 001 is being deployed at Great Pacific Garbage Patch.