Who was the greenest, most environmental President so far? You’ll be probably surprised to learn it’s Richard Nixon. Yes, that Richard Nixon, also America’s most disgraced President. This Republican’s record on the environment is not only second to none, it’s had a profound and lasting effect.

Some argue that Nixon was just doing what was politically expedient, cynically exploiting the mood of the time for votes, and didn’t really care much for the environment. In fact, he’s on record being skeptical of the true intentions of environmentalists, calling them “demagogues” and stating in secretly recorded tapes:

He also said that we can’t have a pollution-free society or we’d have to “go back and live like a bunch of animals”.

Despite such opinions, there is agreement among historians that Nixon did push some pieces of green legislation personally and didn’t stand in the way of others.

Nixon “was probably our greatest environmental president up to now,” said Stephen Hess, a senior fellow emeritus at the Brookings Institution. “He was a very environmentally aggressive president, although that’s not what people tend to remember about him.” 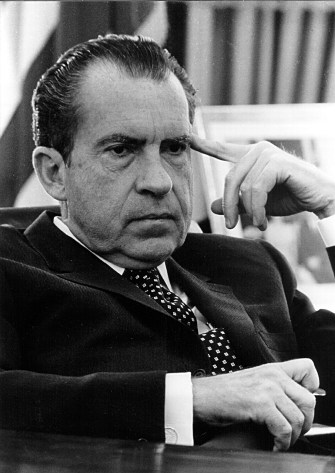 It bears saying that perhaps this is one area where actual accomplishments are much more important than words or even intentions. And the achievements of the Nixon administration with regards to protecting the environment were plenty. In 1970 alone, he signed the National Environmental Policy Act into law, which required environmental impact statements for major new building projects, created the Environmental Protection Agency (EPA) and signed the landmark Clean Air Act, perhaps the most significant air pollution control bill in American history.

During his time as President, Nixon also created the National Oceanic and Atmospheric Administration (NOAA), approved the Clean Water Act and helped protect animals via the Marine Mammal Protection Act and the Endangered Species Act.

Overall, Nixon signed 14 major pieces of “green” legislation into law, basically setting up the framework of the U.S. environmental policy up to now.

Nixon’s 1970 speech to Congress sounds a thoughtful and dialogue-encouraging note on the environment that resonates today:

“The fight against pollution,” Nixon said, “is not a search for villains. For the most part, the damage done to our environment has not been the work of evil men, nor has it been the inevitable by-product either of advancing technology or of growing population. It results not so much from choices made, as from choices neglected; not from malign intention, but from failure to take into account the full consequences of our actions.”

He was also realistic about how the environment and the economic needs of America are interconnected.

“The price of economic growth need not, and will not be, deterioration in the quality of our lives and our surroundings,” said Nixon. “The destiny of our land, the air we breathe, the water we drink, is not in the mystical hands of an uncontrollable agent. It is in our hands.”

Perhaps, without Watergate, history would have an entirely different opinion of Nixon. Outside of Teddy Roosevelt, another Republican President, and also considered one of the most environment-friendly leaders for his work on conservation, Nixon made probably the most significant contribution to protecting this planet (maybe of anyone ever, if you think about the influence of his office). Whatever his personal failings, his Presidency is a reminder of a time when bipartisan action on key issues like the environment was possible. The Clean Air Act of 1970 passed the Senate with just one “nay” vote.

Ask Ethan: could we reach the speed of light by Christmas?

If we left on New Years Day, how close could we get if we kept accelerating every second of every day?“The very closest stars would require many years to visit, even […]