When the Apollo astronauts brought back rocks from the Moon, they observed an interesting shared characteristic. Many of the impact melt rocks they collected—essentially, the melted remains of asteroids or comets—seemed to have hit the Moon around the same time, about 3.8 billion years ago. Were it business as usual in space, one would expect to see a wide distribution of asteroids or comets that occasionally struck the Moon by sheer luck. But instead, it seemed like something catastrophic had happened all at once.

When scientists looked to other rocky objects in our solar system, they began to see evidence of a similar bombardment around the same time. Craters on Mars can be dated to between 4.1 and 3.8 billion years ago. Portions of the surface of Mercury, too, appear to have originated around that time, which is odd since the planet formed a few hundred million years before that. Researchers believe that this bombardment, in conjunction with volcanic activity, churned up Mercury’s surface. There’s even evidence on Venus and Earth that something incredible happened 3.8 billion years ago. Researchers now call this period the Late Heavy Bombardment (LHB).

At first, the LHB was a controversial idea, but as we began to see more evidence on other planets, it started to gain more acceptance. Clearly, something happened; the four terrestrial planets in our solar system bear thousands of scars, all originating from around the same time. But if we were under assault from the stars, then what caused it?

There are a few different hypotheses for what caused this event. It could be that Jupiter and Saturn ponderously shifted their orbits over time, upsetting the asteroid belt. Or, a large asteroid crossing Mars’s orbit could have broken apart, sending fragments scattering across the solar system. But one of the more interesting explanations is that our solar system used to have another terrestrial planet: Planet V. 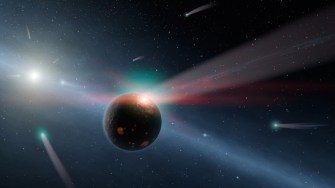 An artist’s impression of the Late Heavy Bombardment.

What happened to Planet V?

Based on simulations of our solar system, some researchers believe that a rocky planet used to exist between Mars and the asteroid belt. It’s possible that Planet V began with a fairly stable orbit, but, over a period of about 600 million years, the inner planets may have driven the planet into a highly eccentric orbit.

This planet would have been a quarter the mass of Mars, easily tossed around by its larger neighbors. Researchers have run hundreds of simulations, some of which tweaked the asteroid belt to account for the mass it would have lost during the LHB, the orbits of other planets, or made other changes to account for the possible differences between our solar system billions of years ago and today. From these simulations, we can see three possible scenarios if Planet V did in fact exist.

As Planet V’s orbit became more eccentric, it could have crossed into the asteroid belt, scattering the asteroids to the four remaining inner planets, sending a surface-changing bombardment that may even have brought water or other chemicals to planets, including, possibly, our own. Eventually, it would have swung out of our solar system.

The second possibility is much like the first: Planet V’s orbit became eccentric, and it disrupted the asteroid belt. Only instead of swinging wide into space, it slowly fell into the Sun.

Simulations also showed a third possibility: Planet V collided with another planet in our solar system. If this happened, though, there would be some massive crater on the surface of one of the inner planets. If Planet V was much smaller, it could have crashed into Mars, forming the Red Planet’s massive Borealis Basin, which covers about 40% of its surface. Rather than dragging any asteroids out of orbit, the debris from the impact could be responsible for the LHB all on its own.

While it’s a fascinating hypothesis, Planet V is still just that. We know that something caused the LHB. The evidence is scattered across the face of our neighboring planets. But what caused it—whether the movements of existing planets over time, the presence of a neighboring planet that moved out or fell into another celestial body, or something else entirely—is still a mystery.

What are ‘black bloc’ anarchists?

The controversial protest tactic has a checkered history.