Editor’s Note: This article was provided by our partner, RealClearScience. The original is here.

Ebola is one of the scariest viruses on Earth. Along with Marburg and a few other lesser known viruses, it is a member of the Filoviridae family, a nasty group of microbes that causes hemorrhagic fever. Like most viral diseases, patients with hemorrhagic fever will first present with flu-like symptoms. As the disease progresses, patients often bleed from their body orifices, such as their eyes and ears. Death, however, does not result from blood loss, but from shock or organ failure.

Hemorrhagic fevers are not easy to catch. Transmission generally requires prolonged contact with the patient or with his bodily fluids. Mortality rates depend on the particular viral strain. For Ebola, the deadliest strain is Zaire, which can kill up to 90% of those infected. The worst ever outbreak occurred in Congo in 1976. That year, 318 people were infected and 280 died, a mortality rate of 88%. Currently, an outbreak of Ebola has killed at least 135 people in west Africa. The virus resembles Zaire, but researchers have determined that it is a brand new strain.

Obviously, finding a treatment or cure for such a frightening disease is desirable. With our highly interconnected world, it is only a matter of time before a hemorrhagic fever shows up on our doorstep. (Actually, that’s already happened.) Unfortunately, at the present time, there is little that can be done for a victim of Ebola or any other hemorrhagic fever. Mostly, patients are kept hydrated and symptoms are treated as they arise. Other than that, doctors cross their fingers and hope the patient doesn’t die.

That may be about to change. In the journal Nature, scientists — who conducted much of their work in the secretive, high-containment biological laboratory maintained by USAMRIID at Fort Detrick, Maryland — have reported the discovery of a small molecule that rescues rodents and monkeys from various hemorrhagic fevers. Even more, the drug exhibited activity against a wide range of viruses.

The molecule, named BCX4430, resembles the famous “A” found in DNA: adenosine. (Recall that DNA is made of Adenosine, Thymidine, Cytidine and Guanosine.) The RNA-based filoviruses also use “A” in their genomes. BCX4430, because it resembles “A”, can be accidentally used by the virus when it is trying to grow inside of our cells. For the virus, this is a fatal mistake. BCX4430 blocks further growth and reproduction.

Hold up a minute, you’re probably thinking. Don’t all cells use “A” too? Shouldn’t this drug be expected to hurt not only the virus, but humans as well? That would be a reasonable expectation, but for some reason, BCX4430 appears to only hurt the virus. Human cells appear not to be fooled by BCX4430 and do just fine in its presence.

The most compelling experiment the research team ran involved the infection of cynomolgus macaque monkeys with deadly Marburg virus. Macaques were given twice daily doses of BCX4430 for 14 days beginning 1 hour, 24 hours, or 48 hours post-infection. (See graph. There were six monkeys in each treatment group.) 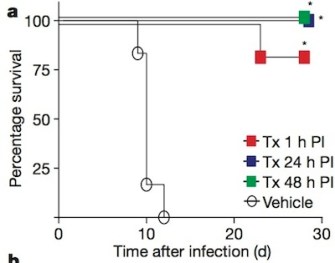 As shown above, all of the monkeys that did not receive BCX4430 (labeled “vehicle”) died by day 12. However, every monkey (except for one) that received a dose of BCX4430 survived, even if the initial dose came 48 hours after infection. In total, 17 out of 18 treated monkeys lived.

Amazingly, in vitro experiments showed that BCX4430 could potentially work against a wide range of viruses, including SARS, MERS, influenza, dengue, and measles.

Because no human clinical trials have yet been conducted, it’s still far too early to pop the cork on our champagne bottle. But this antiviral holds the greatest potential for curing nightmarish hemorrhagic fevers.

De-extinction, if it is ever possible, will not be simple.
Health

Being mortal makes life so much sweeter.
Up Next