The report, which served as the basis for an episode of “The Doctors Who Gave Up Drugs”—a BBC One show—described how a 24-year-old mother named Sarah had approached doctors with one goal in mind: to get rid of her depression and the medications she’d been prescribed to treat it. Those drugs put her in a “chemical fog,” she said.

Under the supervision of Dr. Chris van Tulleken, who co-authored the new report, Sarah started reducing her dosage of antidepressants and began swimming in water with temperatures near 60 degrees Fahrenheit. Dr. van Tulleken, who himself practices cold-water swimming, described his experience with the treatment to the BBC:

“Underwater, I feel an intense mixture of burning pain and, even after doing this for years, a little panic. But it’s the only time the anxious negative chatter in my head is truly silenced. After two minutes, as my skin reaches the same temperature as the water, I start to feel comfortable and my breathing slows. After even a brief swim, I feel elated for hours and calm for days.”

After four months of cold-water swimming, Sarah reported that her symptoms had stopped and that she was off all medications.

How does cold-water swimming help depression?

“One theory is that if you adapt to cold water, you also blunt your stress response to other daily stresses such as road rage, exams or getting fired at work,” van Tulleken told The Guardian.

This theory is based on an idea called cross-adaptation, which is defined as the temporary loss of sensitivity to a stimulus following exposure to a different stimulus. In other words, cross-adaptation enables you to steel yourself against one kind of stressor by undergoing another.

But until further research is conducted, it remains unclear why exactly cold-water swimming seems to combat depression and also whether effects gained from cross-adaptation could last over the long term.

Depression is one of the leading causes of disability in the U.S., causing an estimated $210 billion of productivity loss every year. Some 13% of Americans are currently prescribed antidepressants, many of whom might be interested in an effective, non-pharmacological treatment for the condition. 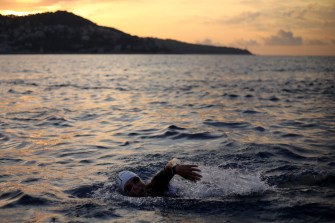 Although it may help treat depression, swimming in cold water needs to be done safely.

How to swim in cold water safely

Cold-water swimming can be dangerous because drastic temperature changes can trigger rapid increases in your breathing and heart rate. The Outdoor Swimming Society offers these six tips for doing it safely (though you should consult your doctor if you have pre-existing medical conditions):

As the temperature drops, just keep swimming, and your body will get used to the cold.

Open water can be dangerous. Only ever swim where it is safe, and make sure you can enter and exit the water quickly and easily. Never swim on your own.

Wear a swimming hat, or two, to help preserve body heat. You can also wear neoprene gloves, booties, a balaclava, or a wetsuit—whatever you feel comfortable with.

Do not dive or jump in unless you are used to the cold water. Cold water can cause gasping and cold water shock, which can be dangerous.

As the temperature drops, decrease the amount of time you spend in the water. In winter, swimmers often only swim for one or two minutes at a time.

Don’t have a hot shower. Hot water can actually cool your core, which can be dangerous. Instead, make sure you have plenty of warm clothes, wrap up well, and have a hot drink.

Living at a higher elevation is a double-edged sword.
Up Next
Politics & Current Affairs

On Sunday, a woman accused the Supreme Court nominee of sexual assault in an interview with the Washington Post.