The title of the paper just submitted for peer review says it all: ‘BrainNet: A Multi-Person Brain-to-Brain Interface for Direct Collaboration Between Brains’. Developed by scientists from the University of Washington and Carnegie Mellon, the system passes simple signals from one person’s brain to another, allowing for collaborative decisions: The first meeting of minds involved manipulating pieces in a game of Tetris. The hope is that BrainNet can, over time, be scaled up for informationally richer communication.

YES and NO choices are represented by the circles at the edge of each screen. “BCI” stands for “Brain to Computer Interface” while “CBI” is the abbreviation for “Computer to Brain Interface.”

The BrainNet three-person brain-to-brain interface (BBI) system combines an electroencephalography (EEG) sensor that records a signal from a Sender’s brain, decodes it, and delivers it to another person’s occipital cortex through a transcranial magnetic stimulation (TMS) cap. It’s perceived by the Receiver as a phosphene, or a brain-produced flash. Two Senders can be connected to the same Receiver.

A game of Tetris for the ages

The researchers recruited 15 subjects—18–35 yrs, eight female—and divided them into five trios, each of which contained two Senders and one Receiver.

The experiments consisted of a single task performed multiple times: The successful completion of a single round of Tetris. As in any Tetris game, the goal was to rotate, if necessary, a slowly falling piece so that it successfully completed a row at the bottom of the screen. Both Senders offered advice—not always in agreement—to the Receiver. 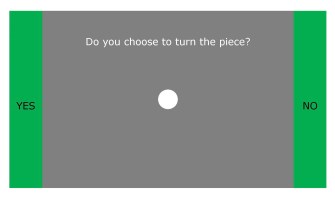 The lights flashed at different frequencies —17 kHz per second for YES and 15 kHz for NO — allowing the EEG to use the different rates as a way of identifying the Sender’s decision.

Thinking about a yes or no choice

As a piece moved downward, each Sender was presented a yes/no choice regarding whether or not the piece needed to be rotated or not. He or she was instructed to stare at either the on-screen YES or NO lights to move a cursor toward the light representing the desired choice. 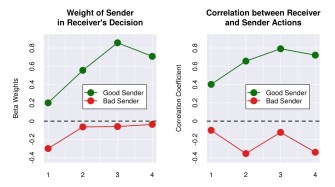 The EEGs transmitted each YES or NO via TCP/IP to a decoder for conversion to a single TMS pulse that was then delivered to the Recipient’s TMS cap. If the pulse was strong enough, a phosphene would appear to the Recipient signifying a “yes, rotate the piece” signal. If not, no phosphene would be seen, meaning, “no, don’t do anything.”

It was up to the recipient to make a decision as to who was providing the best instructions. The researchers introduced this element as a way of assessing the extent to which recipients could filter out “noise,” which is to say, worthless information.

The paper says, “To investigate whether the Receiver can learn the reliability of each Sender and choose the more reliable Sender for making decisions, we designed the system to deliberately make one of the Senders less accurate than the other. Specifically, for each session, one Sender was randomly chosen as the ‘bad’ Sender and in ten out of sixteen trials in that session, this Sender’s decision when delivered to the Receiver was always incorrect, both in the first and second round of the trial.”

Over the course of the tests, the researchers found that Recipients became quite good at tuning out their bad Senders.

Is this what you really want?

Once the Recipient had rotated the piece or not, the piece was displayed for the Senders hanging halfway down the screen in its current orientation. At this point, the Senders could once again send instructions to the Recipient who could then rotate it, if necessary, for the piece’s final correct placement. 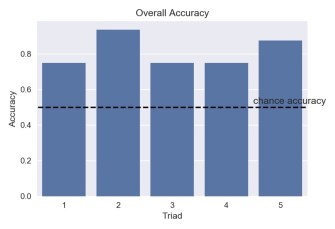 The paper found in the end that, “Five groups, each with three human subjects, successfully used BrainNet to perform the Tetris task, with an average accuracy of 81.25%.” That’s pretty impressive and way above the random odds of success, as the report’s figure illustrates.

Of course, BrainNet is just a beginning at best, dealing with extremely simple binary choices from Senders, and a fairly simple binary choice for the Recipient to make. This nothing like sharing a complex thought. The team has considered adding other, levels of exchange, perhaps via fMRI, to give greater depth to the type of information that can be sent and received. Their hope, though, is that BrainNet is an early step in the “possibility of future brain-to-brain interfaces that enable cooperative problem solving by humans using a ‘social network’ of connected brains.”

A new study shows how interbreeding of modern humans and Neanderthals boosted our genomes.