As the U.S. healthcare system braces for a surge of COVID-19 patients, American doctors may soon have to answer an ugly question: How should they allocate the nation’s limited medical resources? In other words: Who should live and who should die?

In Italy, doctors have been making these decisions for weeks. To guide the process, the Italian College of Anesthesia, Analgesia, Resuscitation, and Intensive Care (SIAARTI) has issued ethics recommendations for rationing limited resources, such as ICU beds and ventilators. These guidelines, authored by medical doctors, take a utilitarian approach that aims to “maximize the benefits for the largest number of people.”

The main goal is to save as many lives as possible, but it’s complicated. For example, if a doctor has to choose between giving an ICU bed to a 45-year-old patient and an 85-year-old patient, both of whom have equal chances of recovering from COVID-19 if treated, who should get the bed?

A doctor following Italy’s guidelines would likely choose the 45-year-old, because the 85-year-old would likely have fewer years to live after recovering from the disease. This utilitarian decision may make sense, but that doesn’t make it emotionally easy for doctors. In fact, this decision is actually the opposite of how most doctors would normally treat elderly patients, who are typically given priority in hospitals. 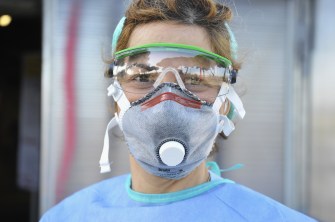 The most sobering part of the Italian guidelines is perhaps the suggestion that it may be necessary to set an age limit for admission to ICUs. But is turning away elderly patients to allocate resources on “those who have a much greater probability of survival and life expectancy” a utilitarian decision that goes too far?

In deontological ethics, the answer may be yes. Deontology is a normative ethical theory that says the morality of an action is based on whether the action itself is right or wrong, not on the consequences the action produces.

“The deontologist might well start with a justice argument: each person is individually valuable and should have an equal chance of health care,” Anders Sandberg, a philosopher at the Future of Humanity Institute at the Oxford University, told Quartz.

But in a situation where medical resources are extremely scarce, and treating every patient equally is simply impossible, even deontologists would likely agree that it’s best to prioritize patients who are most likely to benefit.

So, how are American doctors thinking about the ethics of coronavirus treatment? A paper published Monday in The New England Journal of Medicine suggests that most would support a strategy similar to Italy’s.

“Priority for limited resources should aim both at saving the most lives and at maximizing improvements in individuals’ post-treatment length of life,” the paper states. “Saving more lives and more years of life is a consensus value across expert reports.”

The medical doctors who authored the paper offer six recommendations for how to ethically allocate resources in the coronavirus pandemic:

These recommendations generally align with existing guidelines in the U.S. and Canada for how healthcare professionals ought to allocate resources in emergencies. But not everyone agrees on every part of these strategies, or on what exactly it means to maximize benefits.

“There are arguments about valuing the young over the old that I am personally very uncomfortable with,” a British researcher told the New York Times in a recent article. “Is a 20-year-old really more valuable than a 50-year-old, or are 50-year-olds actually more useful for your economy, because they have experience and skills that 20-year-olds don’t have?”

Still, utilitarian strategies seem to be the most popular in pandemic scenarios. Civilians seem to agree, too. A 2019 study, for example, asked focus groups in Maryland how ICU beds ought to be rationed in the event of a pandemic. The groups favored a utilitarian approach almost identical to that currently being used in Italy: prioritize the young, and those with the greatest odds of survival.

A utilitarian strategy may be the most moral, but that simply makes it the least bad among a set of terrible options. Unfortunately, this leaves doctors facing an ‘unavoidable moral failure’, according to a paper recently published by Joshua Parker and Mikaeil Mirzaali in the Journal of Medical Ethics.

“Choosing between patients knowing that this may lead to death presents an impossible situation and leaves doctors facing ‘unavoidable moral failure’. Either the doctor performs as a deontologist prioritising the needs of the individual patient in front of them or as a utilitarian maximising the greater good. Either way, important moral principles are violated. Whatever the doctor does, something of moral value is lost. Whilst following utilitarian principles might be all things considered best, and the doctor has little other option, many will still retain feelings of guilt and remorse.”

The new agency wants to push the boundaries of science and technology.
High Culture

Successful forgers are remembered as great conmen, not artists. This is strange, considering their forgeries fooled even the most seasoned critics.
13.8

Why we need to restrict calories right now

A new study shows the benefits of calorie restriction. Never has such advice been more needed.