Dr. Drew Ramsey is a psychiatrist, author, and farmer. He is one of psychiatry’s leading proponents of using dietary change to help balance moods, sharpen brain function and improve mental[…]
Go to Profile
Health

Antidepressants: Why the ‘Overmedicated America’ Narrative Is Harmful

Big Pharma has got itself a bad, bad name. Many people become nervous at the mention of pharmaceutical intervention for mental illness, but there’s another solution that may bring ease to some: it’s called little farmer, quips psychiatrist Drew Ramsey. For how food can control conditions like anxiety and depression, look through Ramsey’s previous videos on Big Think. But here, Ramsey wants to address the popular notion that America is overprescribed. “I always like to point out that the ten percent of Americans who take antidepressants in the morning, they do that voluntarily because it’s something that helps them.” In his 16 years of psychiatric practice, Ramsey has more often seen mis-prescription rather than overprescription. But at least mis-prescribed people are on the path to finding the right treatment – much worse is the people who aren’t getting any help at all whether it be diet, or therapy, or pharmaceuticals. Psychiatric medication isn’t right for everyone, but in many cases it truly saves lives, says Ramsey. If we continue to propagate the over-prescription myth for this kind of medication (opiates are another issue), it may alienate those who need help from seeking it at all. Stigma doesn’t help in the effort to reduce severe life disruption and suicide, which for the latter totaled 42,773 Americans in 2014, a steep rise from 29,199 people in 1999. Drew Ramsey’s book is Eat Complete: The 21 Nutrients That Fuel Brainpower, Boost Weight Loss, and Transform Your Health. 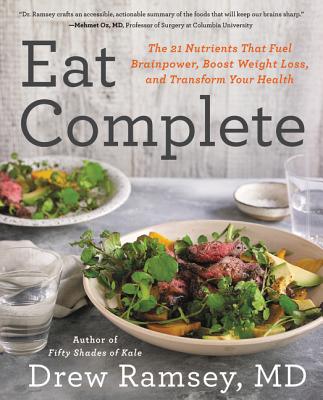 Drew Ramsey:  I think the big question in people's minds is who can they trust for their information about mental health? On the one hand we have big pharma, and there have been some incredible breakthroughs. I'm a psychiatrist. I prescribe medications and I find some people really it saves their lives. And you don't hear that in the media. This week I've heard a number of antidepressants called a miracle drug, a miracle cure and I don't take any money from big pharma I've just used these medications for over a decade now. For some people they're lifesavers. Then there's the supplement industry. And the supplement industry is really largely unregulated. They make a number of claims that really aren't supported by the evidence and it gets people into a notion, this happens a lot where instead of taking a medicine that's been closely studied and brought to market and closely monitored, they'll be taking five, ten, 15 different supplements. It's hard to know as a physician whether that's safe or not and whether that's really warranted. There's a lot of delay in terms of people getting appropriate treatment. Then, of course, we have talk therapies, which tend to take a longer time and cost more money.

So this is where I think food comes into the picture. One is we all can agree we trust. For the most part if it's a whole food it grows on a farm. There are concerns about big pharma out but I've never heard a concern about little farmers so that's where I try to direct people. And I also like it as a psychiatrist that it's one of my interventions that is absolutely delicious, that people like, that people can do for themselves. We're in an epidemic of mental illness and we're also in an epidemic of misinformation about mental illness. The amount of stigma that we see still and the embarrassment that my patients have for a victory over some of the most debilitating and disabling illnesses and deadly illnesses in the world, it's concerning as a doctor. I see people just profoundly ashamed by how they're feeling and the illness that they have. So I think we have a long way to go. I think we're getting there. I think more and more - I've been a psychiatrist for 16 years, there's a change in the conversation. People talk about having bipolar illness. People talk about being treated for depression. Men talk about being treated for depression really for the first time in history in a way that it gives me some hope that if we can have a more open conversation we can make a bigger dent. Now it's what more than 40,000 suicides a year in America. We have 600,000 veterans with severe traumatic brain injuries. We have a lot of work to be done.

And on the front lines of mental health I think I just try to remind myself to sit with my patients, to do no harm and to give them a menu of options. I think that's one of the things that's gotten missed in this whole discussion about mental health. People talk about how many people are kind of overmedicated in America and I always like to point out that ten percent of Americans that take antidepressants in the morning, they do that voluntarily because it's something that helps them. And I think that when we talk about an overmedicated society sometimes we miss the point. I would say that we're a mis-medicated society. I've seen a lot of people in my practice who are just on the wrong meds for the wrong reasons and I've met even more people who've never ever had a trial of even something natural like St. John's wort that has incredible evidence that it's a very, very good antidepressant. And I think that's the part, the folks who aren't getting any help that's the most concerning part to me because that's when people end up in real, real trouble.