A study at Tel Aviv University published in the journal Cell suggests reincarnation, or a phenomenon much like it, is real after all. Well, for germ cells. Nematodes (worms that contain nearly the same number of genes as humans) transmit information through neurons to future generations.

This is likely the reason many animals are born keenly aware of their environment. Insects must make haste upon breaking through their shell; certain mammals are engaged in a life or death struggle from their very first breath. We’ve long known animals are born with an internal guiding system helping them navigate environmental tyranny. This study details how this happens, for worms at least.

Professor Oded Rechavi, in the Department of Neurobiology at Tel Aviv University, explains:

“The mechanism is controlled by small RNA molecules, which regulate gene expression. We found that small RNAs convey information derived from neurons to the progeny and influence a variety of physiological processes, including the food-seeking behavior of the progeny.”

Rechavi believes this research pushes back against biological dogma (the “Weissmann barrier”) claiming that heritable information is segregated from somatic influences. The study details the worm’s nervous system as being genetically encoded with both internal and external knowledge. Animals are born with a sense of place inherited from their parents.

Rechavi and team determined this by cutting off certain progeny’s smelling abilities, which is necessary for identifying food sources.

“We discovered that synthesis of small RNAs in neurons is needed for the worm to efficiently be attracted to odors associated with essential nutrients — to look for food. The small RNAs produced in the parents’ nervous system influenced this behavior, as well as the expression of many germline genes that persisted through at least three generations.”

Whether or not the same mechanism works in humans remains to be seen. Unlike nematodes, we’re notoriously slow developers. Babies are completely dependent on caretakers for years. In this regard, we’re an exception in the animal kingdom. Genetic reincarnation in worms might not be applicable to humans. 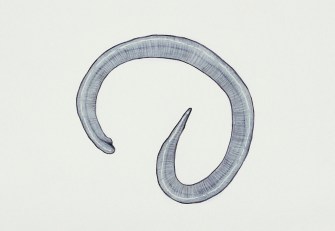 Yet, if it is, Rechavi says it could have a very practical use in medicine. As physician and author Siddhartha Mukherjee writes in The Gene, the booming field of genetics is helping us construct “a new epidemiology of self.” He continues,

“We are beginning to describe illness, identity, affinity, temperament, preferences — and ultimately, fate and choice — in terms of genes and genomes.”

If their evidence holds up in humans, Rechavi believes it could help doctors design better diagnostics and therapies. Identifying diseases earlier in life (maybe even before a child is born) increases their chance of survival, even, as it turns out, across multiple generations. It could, Rechavi concludes, “potentially influence an organism’s evolutionary course.”

There are two kinds of suffering. One is pure pain. The other makes life worth living.
▸
6 min
—
with
Paul Bloom
Up Next
Strange Maps

Average waiting time for hitchhikers in Ireland: Less than 30 minutes. In southern Spain: More than 90 minutes.