When you’re feeling sick, or experiencing symptoms of a potential medical condition, do you consult Google?

Odds are you do: Surveys suggest that more than half of Americans use the internet to search for medical information in any given year, while about one-third have used Google for self-diagnosis.

But some medical professionals wish those numbers were lower. The conventional wisdom in health care is that consulting Google about health concerns doesn’t provide reliable information. Taken to the extreme, obsessively searching for information about medical conditions can itself become a medical condition: cyberchondria.

“This is such a common issue that there’s a running joke between healthcare professionals that if you Google a symptom (any symptom), you’ll inevitably be told you have cancer,” wrote the Anonymous Nurse for Healthline. 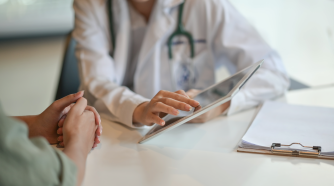 Shot of a doctor showing a patient some information on a digital tabletCredit: bongkarn via Adobe Stock

“Despite its ubiquitous use, the benefits and harms of an internet search for health information are poorly understood,” wrote the authors of a new study published in JAMA Network Open. “Previous research has been largely limited to observational studies of internet search behavior and may lack a criterion standard.”

For the study, 5,000 participants read a short vignette describing a person who was experiencing a set of medical symptoms. The symptoms listed in the vignettes described common conditions, from viruses to strokes, and the participants were asked to imagine that the person suffering from them was a close family member.

After reading the vignette, the participants predicted the most likely medical diagnosis, selected a triage option, and reported their own anxiety levels — all without searching the internet for medical information. In the next part of the study, the participants were asked to use the internet to help them select a diagnosis and triage option for the same hypothetical case. Again, they reported their anxiety levels.

The results showed that using the internet helped the participants select slightly more accurate diagnoses. However, the searches didn’t affect their anxiety levels or their ability to select appropriate triage options.

“Our work suggests that it is likely OK to tell our patients to ‘Google it,'” study author David Levine, MD, MPH, of the Division of General Internal Medicine & Primary Care at the Brigham and Women’s Hospital, said in a press release. “This starts to form the evidence base that there’s not a lot of harm in that, and, in fact, there may be some good.” 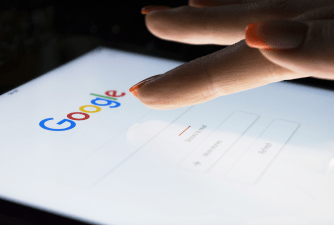 A woman’s hand is touching screen on tablet computer iPad pro at night for searching on Google search engine.Credit: Aleksei via Adobe Stock

What explains the disconnect between the conventional wisdom and the results? One reason might be that search engines have gotten better at directing people to high-quality medical information.

“For example, several search engines have their own built-in health information curated by major medical centers, and in this study, almost half of the respondents believed such information was the most helpful,” the authors wrote, adding that few participants in the study consulted social media or forums for medical information.

Still, the results don’t suggest Google is a replacement for medical professionals. Although searching Google did help participants reach more accurate diagnoses, the differences were small: 54 percent accuracy after searches compared to 49.8 accuracy before searches, which is statistically significant.

It’s also unclear how this accuracy rate would change in a real-life situation, whether it involved a family member or the participants themselves. After all, it’s likely that people would experience more anxiety when facing actual medical problems, rather than simply considering a hypothetical situation.

But it’s worth noting that the participants did seem to take the hypothetical situations seriously: They tended to report higher levels of anxiety when the vignettes described more serious conditions, suggesting that they were “internalizing the cases appropriately.”

Down the line, the researchers plan to explore how artificial intelligence might help people find more accurate medical information online.

13 films everyone should watch and why—as voted by you

A curated list of must-watch films from Big Think readers.