Humans consume too much sugar. This is a refrain you’ve likely read for years, if not decades. As with any generality, that topline assessment misses nuance. While certainly true that we over-consume sugar in the Western diet — added sugar goes by at least 61 names and has been found in 74 percent of processed foods — sugar itself is a necessary carbohydrate. In fact, core metabolic processes, like glycolysis and the Krebs cycle, largely revolve around the processing of glucose.

This fact has caused some researchers to ask: can we create healthy sugar?

A primer on sugar and fad diets

Trying to make sense of the market for sugar substitutes is not necessarily helpful. Reading a nutrition label with terms like coconut sugar, xylitol, sucralose, Ace-k, or non-GMO dextrose leaves consumers scratching their heads. The aggressive agave nectar marketing campaign a few years ago caused many companies to market their products as having “real sugar.” (As opposed to what? Fake sugar?)

The biochemical story of what happens to this carbohydrate inside of the human body is complex, however, and rarely will be answered by a company trying to sell its wares.

Monosaccharides, a.k.a. “simple sugars,” are quite common. Galactose, glucose, and fructose fall in this category. Compound sugars, a.k.a. disaccharides, include sucrose (table sugar), maltose, and lactose. Then there are chemicals like sugar alcohols and glycerol, which are sweet but not actually sugar.

Most plants contain sugar. Fruit and honey also contain readily available simple sugars. Two common sources for processed food sugars are sugarcane and sugar beets. The cheapest to produce is corn syrup, which has been at the heart of the sugar debate for years. Due to farm subsidies, an overproduction of corn has led to this class of sugars being ubiquitous in the Western diet. Biochemically, believe it or not, high-fructose corn syrup isn’t all that different from honey.

Historically, sugar was a rare and valuable commodity, often hard-won through gnawing on sugarcane. Fruits provide a quick and reliable burst of energy through their high sugar content, an especially useful trait for hunter-gatherers who relied on such fuel. As humans became addicted to sweetness, eschewing other flavor profiles to get right to the sugar rush, we figured out how to produce (and overproduce) it rapidly.

Thus, we got diet fads like “juice cleanses,” which offer a rush of sugar without the fiber that slows its absorption into your bloodstream. Fiber is the most important part of the fruit. Detoxifying through such cleanses is a myth. Given the climate for sweet alternatives and nutritional shortcuts, however, we’ve grown susceptible to flashy marketing over solid nutritional science.

Israeli food-tech company DouxMatok (Hebrew for “double sweet”) has created a sugary product that uses 40 percent less actual sugar yet still tastes like the sucrose that you would find in many products. The team noticed that our sweet receptors only detect about 20 percent of the sugar molecules that we consume, meaning the other 80 percent goes right into our bodies unnoticed by our mouths.

Sugar science is constantly evolving. The WHO currently recommends a maximum of five to ten teaspoons (roughly 50 grams) of added sugar per day. To put that into perspective, Americans average 17 teaspoons (71 grams) per day — a whopping 57 pounds of sugar every year. One can of Coke contains nearly 10 teaspoons of sugar. Orange juice isn’t much better.

This excess sugar leads to many potential health problems. A 2014 study in JAMA Internal Medicine states it bluntly: people who received between 17 and 21 percent of their daily calories from sugar had a 38 percent higher risk of dying from cardiovascular disease than those who consumed 8 percent of their calories from sugar. Harvard nutrition professor Dr. Frank Hu summarized his research with a simple assessment: “Basically, the higher the intake of added sugar, the higher the risk for heart disease.”

The problems don’t stop there. Sugar is metabolized similarly in the liver as alcohol — indeed, many alcoholic beverages contain high amounts of sugar — and the carbohydrates are turned into fat. As you gain weight, the health problems continue to escalate.

Issues with overconsumption of sugar include: 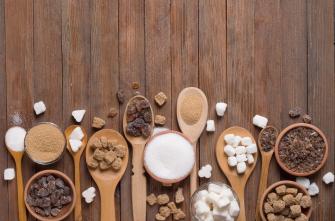 Regardless of negative health effects, people love sweet foods. The desire for sweet-tasting foods is biologically programmed into us. The problem isn’t eating sugar-rich foods per se; it’s excessive consumption. Public health advice to cut down isn’t working, and so a lot of companies are trying to offer alternatives.

High-intensity sweeteners are the most common substitute. These compounds are much sweeter than table sugar, meaning you need less of them in order to achieve the same level of sweetness. In America, there are six FDA-approved sweeteners in this category:

Acesulfame Potassium (Ace-K). Most commonly known under its trade names, Sunett and Sweet One, this potassium salt was first discovered in 1967. Two hundred times sweeter than common sugar, research has shown that Ace-K has no effect on body weight. Concerns over its possible carcinogenic effects were dismissed by the FDA, though as with all sugar substitutes, research is ongoing.

Advantame. This non-caloric sweetener is a whopping 20,000 times sweeter than sucrose and is commonly used in gum, drinks, and candy. It is approved in the U.S. as a flavor enhancer except in meat and poultry. It was recognized as safe by the European Food Safety Authority in 2013.

Agave syrup. This sweetener from the agave cactus was commonly used in health circles for years. It contains 56 percent fructose and dissolves quickly, making it ideal for cooking. Blue-agave syrup is between 1.4 and 1.6 times sweeter than sugar, though, and being over half fructose in composition, it also has many of the same detrimental effects as sugar.

Aspartame. As with Ace-K, aspartame is 200 times sweeter than sucrose. First approved by the FDA in 1981, this peptide is one of the most widely tested food ingredients and has been found to be safe. That said, people who suffer from a rare inherited disease, phenylketonuria, cannot consume aspartame, which is why any foods sold in America must list this ingredient with a warning label.

Honey. Foods featuring honey are often marketed as containing “real honey,” though in reality, its composition is similar to sucrose (it contains fructose and glucose), and it is roughly as sweet as sucrose. Anyone consuming honey should heed the same warnings as with common sugar.

Neotame. The aspartame analog, created by NutraSweet, is 8,000 times sweeter than sugar. First approved by the FDA in 2002, Neotame is common in colas, gums, yogurts, cakes, and drink powders. It’s also used to cover the bitter taste of coffee.

Saccharin. This well-known sodium salt is roughly 400 times sweeter than common sugar. While used in numerous drinks, candies, and even medicine, it produces a metallic aftertaste. Considered safe for diabetics, saccharin has no nutritional value and is generally safe — though, anyone with an allergy to sulfonamide could experience symptoms after consuming saccharin.

Stevia. Derived from the South American Stevia rebaudiana plant, it’s “generally recognized as safe” by the FDA. Up to 150 times sweeter than sucrose, stevia is a common additive in many health food products, though some consumers don’t like its bitter aftertaste. The plant itself has been in use for at least 1,500 years as a tea sweetener and medicine.

Sugar alcohols. Sugar alcohols have been all the rage in keto products over the last few years. Otherwise known as polyols, they are actually less sweet than sugar, marketed for not spiking blood glucose levels. Common sugar alcohols include sorbitol, xylitol, and lactitol. This family of sweeteners is considered safe.

Sucralose. Six hundred times sweeter than sugar, sucralose is the most common artificial sweetener in the world. Deemed safe by governing bodies in America, New Zealand, Australia, Canada, and Europe, it is appropriate for diabetics and does not cause tooth decay. The most common iteration of sucralose is Splenda, which is mixed with maltodextrin and dextrose and sold worldwide.

Can sugar be good for you?

The question of whether sugar can be good for you is common but based on an incorrect assumption: we must consume sugar. Our bodies rely on carbohydrates for energy, and carbs are all ultimately turned into sugars. If you were to only eat protein and fat, you would quickly encounter numerous other health problems. The question isn’t whether sugar is good but how much and in what form it should be consumed.

But what about for people who exercise a lot? If you don’t exercise often, sugar will be turned into fat, leading to a cascade of health problems. For endurance athletes, however, sugar is a necessary fuel for training. 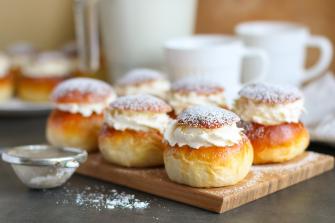 What is the daily recommended sugar intake?

As mentioned above, the recommended daily allowance (RDA) of sugar caps at 10 teaspoons for adults. The latest edition of federal dietary guidelines offers a bit more detail, however.

How is DouxMatok trying to create the healthiest sweetener on the market?

As mentioned earlier, our sweet receptors only recognize 20 percent of the common sugar we consume. Israeli food-tech company DouxMatok was founded by Professor Avraham Baniel, who in 2014, at the age of 96, applied his 75 years of industrial chemical research experience to create Incredo® Sugar. While the start-up aspires to create tastier and healthier variations of a variety of foods (including salt), sugar was the most pressing issue Baniel and his son, Eran, wanted to solve.

DouxMatok is not alone in this quest. For example, global food giant Nestle produced its own sugar reduction in a “healthier” candy bar called Milkybar Wowsomes. The experiment didn’t end well as the company had to pull the item from shelves due to low consumer demand. Matching the flavor profile, density, and texture of sugar is harder than it sounds.

Nestle hasn’t abandoned the quest for sugar alternatives, however. Companies realize their bottom line depends on offering healthier sugar without sacrificing taste and affordability — the same quest that meat alternative companies have been facing for years. While stevia and aspartame are widely used, for example, some consumers recognize the metallic taste and opt for what they know best. This will remain a real barrier until scientists can dial in an alternative that performs well in blind taste tests.

Incredo® Sugar is a sugar reduction created from cane or beet sugar. As the video at the top of the article shows, at least one anecdotal study in the Freethink office scored favorably for DouxMatok. The race is still on. DouxMatok’s initial creation doesn’t work well in liquids, at least not yet. Also, you can’t cook with it on your own; the company is focused on using their sugar alternative in consumer food products first.

As Dr. Robert Margolskee, Director of the Monell Chemical Senses Center, says of the possible timeline, “I think within five years we’ll be able to reduce 80 to 90 percent of the sugar in a food and still get pretty much the full sugar sensation. It’s not an impossible dream.”

Synthetic milk is not a sci-fi fantasy; it already exists.
Health

Virtually all the statistical methods researchers commonly use assume potential mating partners decide who they will have children with based on a roll of the dice.
Up Next
Starts With A Bang

Watch the plasma slide down the prominence like a roller coaster!Our Sun, despite it’s outward appearance as a perfectly hot sphere, is anything but uniform. When take a closer look at […]