It’s hard to ignore the keto diet. You see it in the news when celebrities are promoting it, decrying it or otherwise duking it out over the science. You might hear about it from friends who’ve lost weight by adopting the diet and are now full-fledged keto converts. Or you maybe know somebody with epilepsy who’s used the diet to reduce seizures, as epilepsy patients have since the 1920s.

What’s clear about the keto diet is that it’s an effective tool for weight loss: When you drastically reduce the amount of carbohydrates you eat, your body eventually enters a state of ketosis and starts burning fat instead of carbs for fuel, resulting in weight loss. But what’s less clear is how the keto diet affects mental health, particularly depression.

“Six months on keto. Have lost 40 pounds. But the best result is how I feel. I’ve gone from waking up with dread and fighting suicidal thoughts off and on most days, to feeling energetic, positive, and only a rare, passing, suicidal thought. It is night and day! Omg. Thank you for all of your posts and support!”

Of course, improvements like these might also stem from the simple fact that any diet that helps people lose weight, gain energy or otherwise gain a sense of control over one’s life might also lead to improvements in mood and self-esteem. Still, recent research suggests that the keto diet might in fact be a useful tool in combating depression, and possibly other psychiatric conditions including schizophrenia and ADHD.

The keto diet in the psychiatric literature

In 2017, a group of psychiatrists published a paper called “The Current Status of the Ketogenic Diet in Psychiatry“ that examined research conducted on the keto diet and psychiatric conditions over the past couple of decades. On depression, the overview noted two studies:

Interestingly, the overview also found that the keto diet seems potentially effective at alleviating at least parts of nearly every other psychiatric condition mentioned in the overview, including schizophrenia, autism and anxiety. Still, it’s too early to know for sure whether the keto diet is a safe and effective treatment for any of these conditions, as the researchers concluded:

“While these animal studies are placing research into KD on a firm footing and identifying some promising leads, on balance the evidence in humans is insufficient to form an opinion as to the efficacy or lack thereof of this intervention in the mental disorders reported.” 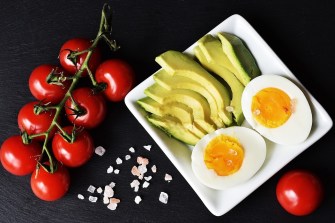 The keto diet emphasizes foods that are low in carbs and high in fat.

​Why would the keto diet help depression?

There are a couple theories as to why the keto diet might help combat depression.

One centers on the diet’s anti-inflammatory properties. A sugar-heavy diet (e.g. one high in carbs) is known to increase inflammation in the body. Meanwhile, inflammation is linked to (at least some forms of) depression, with studies showing that:

So, the idea is that, because ketosis requires a drastic reduction in the amount of sugar you consume, the keto diet might help the body reduce inflammation, which in turn alleviates depression. Here’s how Georgia Ede, a Harvard University-trained psychiatrist who studies the relationship between mental health and nutrition, summed it up to Susie Neilson at The Cut:

“…when refined carbs and sugar serve as the brain’s primary food source, the neural pathways are overwhelmed with free radicals and glucose, depleting our natural internal antioxidants and leading to excess oxidation and inflammation in the brain. When the brain draws its energy from ketones, fewer free radicals are produced, allowing our natural antioxidants to easily neutralize them without becoming depleted. Mitochondria, the “engines” of cells, may function more effectively, and neurotransmitters’ journeys across synapses may be eased.”

However, in high-carb diets the brain often can’t convert enough glutamate into GABA because it’s using glutamate as an energy source. Having too much glutamate and not enough GABA leads to neurotoxicity, and this impaired functioning seems to cause what people commonly call “brain fog.”

What’s interesting is that, for reasons that aren’t fully understood, ketosis seems to encourage the increased production of GABA, reducing neurotoxicity, clearing up that brain fog and (at least potentially) alleviating conditions like anxiety and depression.

Potential problems with the keto diet

If you’re thinking about experimenting with the keto diet, make sure to consult your doctor before making the switch: It’s well documented that your diet can greatly affect your mood, so it’s best to know what you’re getting into before making a major change.

It’s also worth noting that some people seem to encounter problems when switching to the keto diet. Sometimes these problems are caused by the inevitable period of low energy and weakness that one undergoes as the body adjusts to the dietary change, a period commonly called the “low-carb flu.” Others might face complications caused by mineral deficiencies that stem from improperly implementing the diet. And still others might experience problems during the transition stemming from the symptoms of the very conditions they’re trying to manage with the diet.

If you want to escape the negativity, head to Kazakhstan.
Up Next
Life

Your body’s full of stuff you no longer need. Here’s a list.

Evolution doesn’t clean up after itself very well.