Owning and training a dog can seriously test a person’s patience. When your pup won’t stop yelping, pees on your carpet, or knocks over the garbage can and eats the trash again you might understandably feel the urge to shout. But, regardless of your dog’s failure to conform to household rules, try to restrain yourself. New research suggests that by yelling, or otherwise adversely training your dog, you could be causing some serious psychological harm. 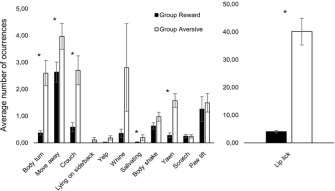 Number of occurrences of each stress-related behavior in the dogs averaged across the three training sessions for Group Reward (filled bars) and Group Aversive (empty bars).

Science Alert reports that a new, preprinted study conducted by researchers at the Universidade do Porto in Portugal discovered that aversive training methods can have long-term negative effects on your dog’s mental state. Adverse methods include positive punishment, such as yelling or hitting, and negative reinforcement, like jerking your dog’s leash or pushing her to sit down.

This study, which has yet to be peer-reviewed, isn’t the first of its kind. Previous research has also found that adverse training has long-term negative effects. However, those studies tended to focus on shock collars used on police and laboratory dogs. For this new study, the international team of researchers looked at nearly 100 companion dogs selected from training schools in Porto. This included 42 that had attended schools that used reward-based training, like treats or toys, and 50 that were trained using aversive methods previously described.

Saliva samples were obtained from each dog to assess how anxious they became from training. Additionally, the researchers observed the dogs’ behavior during training, looking for indicators that the dogs were feeling stress, e.g. yawing, lip-licking, paw-raising, and yelping. Predictably, the dogs in the aversive training groups displayed heightened anxiety behaviors, and their saliva, which researchers had obtained before and after their training sessions, had significantly elevated levels of cortisol compared to when they were chilling out at home. The pups who were trained with positive reinforcement were observably more relaxed, displaying fewer stress signals, and had lower cortisol levels in their saliva.​ 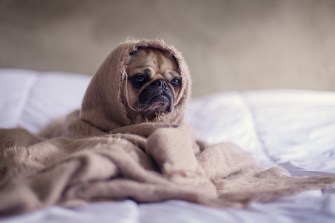 Researchers also wanted to know the long-term effects of training stress. A month after the dogs had been assessed during their training, 79 dogs were then conditioned to associate a bowl on a certain side of a room with a sausage. If the bowl was on that particular side, it always held the savory snack. But if it was located on the other side of the room, the bowl never had the treat. (Each bowl was smothered in sausage so that the smell wouldn’t give the game away.) Next, researchers shifted the bowls around the room to random locations to see how quickly the dogs would come over in search of the sausage. If the dog scampered over to the bowl quickly, the researchers interpreted that to mean that he or she was expecting to find a delicious treat. Slower speeds indicated that the dog was more pessimistic about the bowl’s contents.

“Sure enough, the more aversive training a dog had received, the more slowly it approached the bowl,” reports Science Alert.

Another interesting finding was that dogs that had received reward-based training were quicker to learn where the bowl’s location was as compared to dogs exposed to aversive-training methods. This could either suggest that the reward-based training had actually been more effective in training the dogs. Or it could just mean that dogs who had received treats as part of their reward training were already skilled in the task of finding treats.

“Critically,” the researchers said, “our study points to the fact that the welfare of companion dogs trained with aversive-based methods appears to be at risk.” So, assuming that most dog owners would rather not traumatize their pup, be kind when training your dog.

The research article can be accessed on bioRxiv.

In developed nations, satisfaction with democracy is at a 25-year low

Dissatisfaction is often linked to scandals and economic shocks.